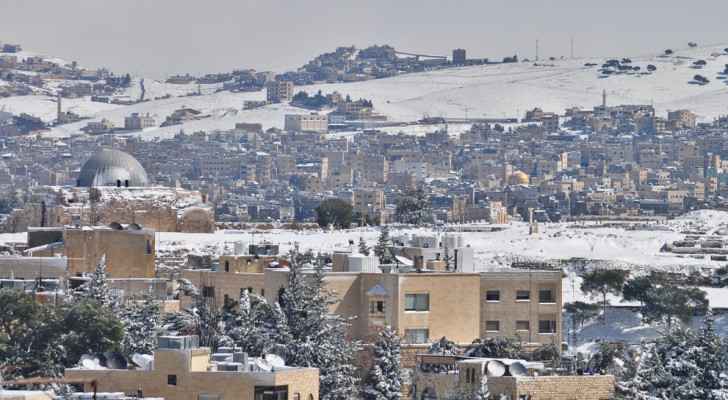 Tuesday, temperatures remain below their normal rates for this time of the year, with cold and partly cloudy weather prevailing in most regions of Jordan, according to Jordan Meteorological Department (JMD).

There is a weak possibility of light showers of rain falling in the northern parts of the Kingdom.

On Wednesday, the weather will be cold and partly cloudy, and starting from the hours of noon, Jordan will gradually be affected by a very cold air mass accompanying an air depression centered on the island of Cyprus.

Thursday, the impact of the very cold air mass deepens, as its degrees continue to drop to record about 10 °C lower than their average rates for this time of the year.

The weather is expected to be very cold, cloudy and rainy in most regions of the Kingdom, and precipitation will be heavy sometimes, accompanied by thunder and hailstones.

Intermittent showers of snow expected to fall over the mountains are limited, and the winds are westerly, with strong gusts, sometimes causing dust in the Badia regions.

The weather on Friday is expected to remain very cold, cloudy and rainy in most regions of the Kingdom, with the possibility of light showers of snow falling over the tops of the high mountains in the morning hours, sometimes mixed with rain.