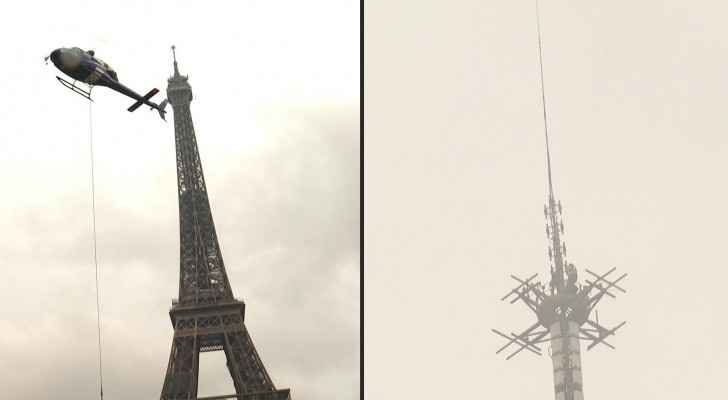 The Eiffel Tower grew by six meters (20 feet) on Tuesday when vertigo-defying engineers fitted a new radio antenna on top of the Paris monument with the aid of a helicopter.

The tallest building in Paris, known affectionately as the Iron Lady, measures 330 meters in height after the new addition.

A smattering of tourists watched as the antenna was lowered into position on Tuesday morning, with the two engineers tasked with securing it to the structure barely visible from the ground.

The new antenna will be used to transmit digital radio for the capital region.

"It's a moment of great pride, historic, rare in the history of the Eiffel Tower," the head of the tower's operating company, Jean-Francois Martins, told reporters.

"She is returning to her roots as a place of technological and scientific experimentation," he said.

The masterpiece was built in 1889 to a design by architect Gustave Eiffel, but was meant to be dismantled 20 years later.

In order to save it, Eiffel worked hard to give it a scientific vocation, installing weather-monitoring equipment and encouraging its use for astronomical observation.

It was its role as an important radio-emitting tower, initially for the military, that saved it from destruction, according to its official history.

In the 1910s, it was being used to send telegrams as far as the United States and is credited with picking up German battlefield instructions during World War I.

Its previous antenna was fixed in 2000 and was used for digital television.

Was Russia really behind the simulated video of the Eiffel ....

Was Russia really behind the simulated ....