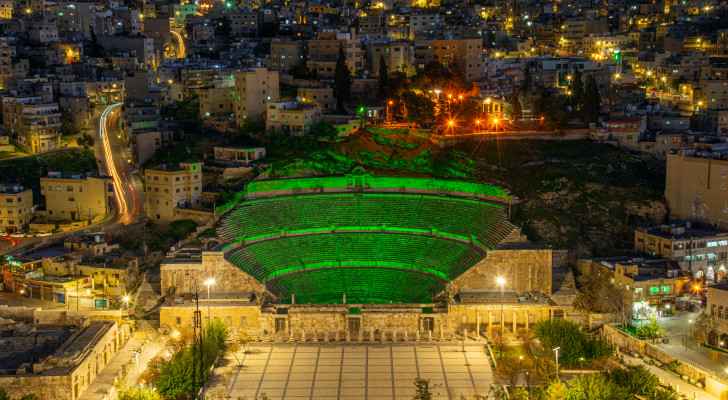 March 17th is St Patrick's Day and Ireland's National Day. It is a day of huge importance to all those people of Irish descent and affinity around the world. Ireland, though a small country with a population of 5 million people, has a huge diaspora of over 65 million people spread around the world. People across the world instantly identify St Patrick’s Day with the island of Ireland.

Ireland’s national color is green and every year, the occasion of St Patrick's Day is commemorated by the ‘Greening’ of iconic structures and monuments around the world. In recent years the Treasury building in Petra and the Citadel in Amman were ‘Greened’ to mark Ireland’s very strong bilateral ties with the Government and people of Jordan.

‘I am delighted, on the occasion of Ireland's National Day, to commemorate the ever strengthening bilateral relationships between Ireland and Jordan. It is a huge privilege to witness the Greening of this beautiful and historic site, of such significance to Jordan and its people.

According to the statement Roya received a copy of, “Any celebration of St Patrick's Day in 2022, is tempered, however, by the recent invasion of Ukraine and the enormous hardship and suffering of the Ukrainian people.”

One hundred years ago, Ireland took our first decisions as a sovereign, democratic state. Because of our hard won struggle for freedom, the key message we would like conveyed on St Patrick's Day 2022, is that in a world where so many people are suffering because of conflict, Ireland will tirelessly work with our partners – in Europe, in the UN, in this region, to protect and restore international law and the principles of the UN Charter. We will continue to stand for peace and against autocracy and oppression, wherever they appear.’

Ambassador O’Neill also referenced a number of events, both physical and virtual, that the Embassy of Ireland has organized to mark St Patrick’s Day, including a virtual reception, which will be held on Thursday 17th March.