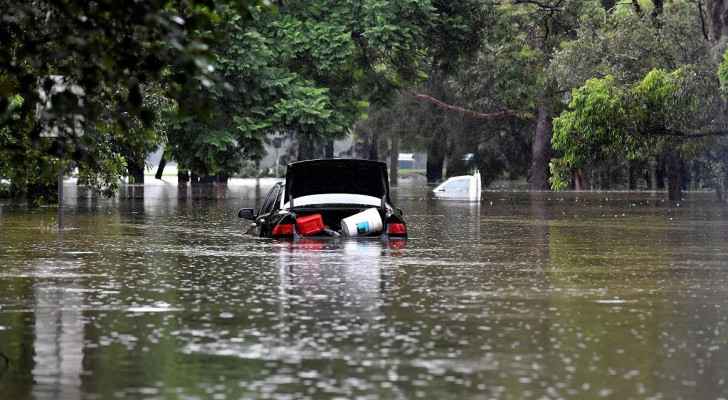 The death toll from week-long floods battering Australia's east coast rose to 20 on Tuesday, after the bodies of a man and a woman were discovered in floodwaters in Sydney.

Police said the pair were believed to be a missing mother and son whose car was abandoned in a stormwater canal.

Tens of thousands of Sydney residents have been told to evacuate their homes as severe storms and flash flooding inundated swathes of Australia's largest city Tuesday.

The national weather bureau warned of "a tough 48 hours ahead" for Sydney, with 60,000 people subject to evacuation orders and warnings, and the city's Manly Dam beginning to spill.

Intense rainfall across Sydney flooded bridges and homes, swept away cars and even collapsed the roofs of a shopping center and a supermarket.

In the riverside suburb of Georges Hall vehicles were semi-submerged and police had to rescue people stranded in their cars by rising floodwaters.

State emergency services have been stretched thin as the torrential rain and intense storms continued into a second week -- with flood warnings in place Tuesday for the entire 2,000-kilometer (1,250-mile) coastline of New South Wales.

In the past week the scale of the damage to property and wildlife has been similar to those devastating bushfires, he said, which ravaged Australia's east for months in late 2019 and early 2020.

"We have also had a similar effect on communities in terms of dislocation with roads closed, infrastructure damaged, power outages," Campbell said.

In the past 24 hours, emergency services have been called to 100 flood rescues across the state, a number that is expected to rise as the full force of the storms bears down on Sydney Tuesday.

In the city's north, flood researchers were evacuated from their lab as water from the nearby Manly Dam began to spill over into suburban areas.

The University of New South Wales facility uses water from the dam to run large-scale experiments about one-in-100- and one-in-1,000-year flooding scenarios.

When he arrived at work in the morning, floodwaters were already rising but soon the downpour caused "significant flooding" in the lab.

"We haven't seen impacts of that magnitude in the 60 years of the laboratory," Harley said.

He said the flooding that had inundated Sydney in recent days showed the need to consider the impact of climate change on the coastal city of more than five million people.

"We have a lot of aging infrastructure in Sydney which were designed for historical flood events," he said.

"A lot of this infrastructure needs to be re-evaluated in the context of climate change."

In the northern reaches of New South Wales -- where floodwaters this week destroyed homes, washed away cars and stranded hundreds of locals on their roofs -- a long, slow clean-up is under way.

According to emergency services, almost half of the 5,000 flood-ravaged homes inspected in the region in the wake of the disaster are uninhabitable.

In Mullumbimby, a town cut off from phone service, internet and outside help for days by the floods, local Casey Whelan told AFP that "lots of people in my street can't get flood insurance".

"They will have no way to rebuild," he said.

Australia has been at the sharp end of climate change, with droughts, deadly bushfires, bleaching events on the Great Barrier Reef and floods becoming more common and intense as global weather patterns change.

Australia must 'muscle up' for tasty Tunisia World Cup ....

Australia must 'muscle up' for tasty ....