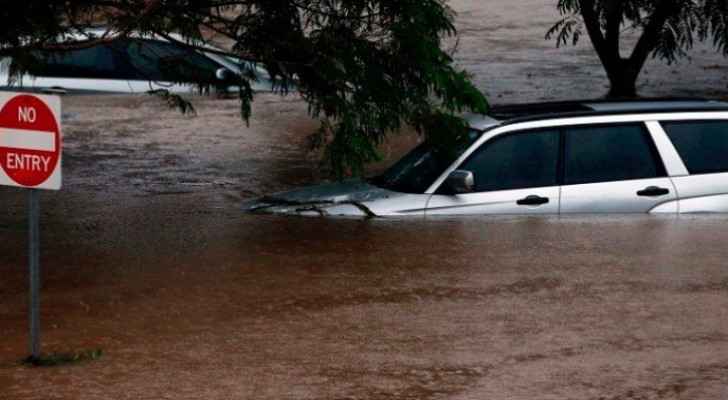 Deadly floods spread down Australia's east coast Tuesday, stranding residents on rooftops and bridges and prompting authorities to order tens of thousands of people to flee their homes.

Flood warnings were in effect for dozens of rivers across the states of Queensland and New South Wales, where a days-long "rain bomb" has dumped a metre (3.2 feet) of rain on some areas in a week.

Several waterways have already burst their banks or broken through levees, inundating towns and forcing residents to flee or seek safety on higher ground.

Authorities have warned that more fatalities are likely.

In one spectacular rescue, a helicopter crew flew in to pluck two people to safety as muddy waters lapped at the corrugated metal roof of their home.

Live television images on national broadcaster ABC showed a rescuer sitting on the roof with the pair, preparing to strap them to the chopper's winch.

In the town of Lismore, nine people were missing amid the worst floods on record.

The local member of parliament for Lismore, Janelle Saffin, had to swim to safety after she was stranded in the floodwaters.

"We went to the verandah, hanging on to the rafters," she told the Nine Newspapers.

Emergency services were overwhelmed by calls for help and flotillas of makeshift rescue boats fanned out across the town as people tried to ferry their neighbours to safety.

Lismore resident Danika Hardiman was rescued Monday after she woke up to find flood waters had reached the balcony of her second-floor apartment in the town's main street.

She and her partner managed to climb up to the roof and were eventually rescued by "two guys in a boat, two locals", she told AFP Monday, describing the scenes in Lismore as "horrific".

"Imagine you're in a boat sailing past people's roofs," she said.

In total, more than 150,000 people are subject to evacuation orders, according to an AFP tally.

Near the town of Grafton, buildings were submerged almost to roof level, roads were washed away and cattle roamed abandoned.

Further south in Sydney, residents endured another day of torrential downpours, and were warned to brace for "major flooding".

Australia has been on the sharp end of climate change, with droughts, deadly bushfires, bleaching events on the Great Barrier Reef and floods becoming more common and more intense as global climate patterns change.