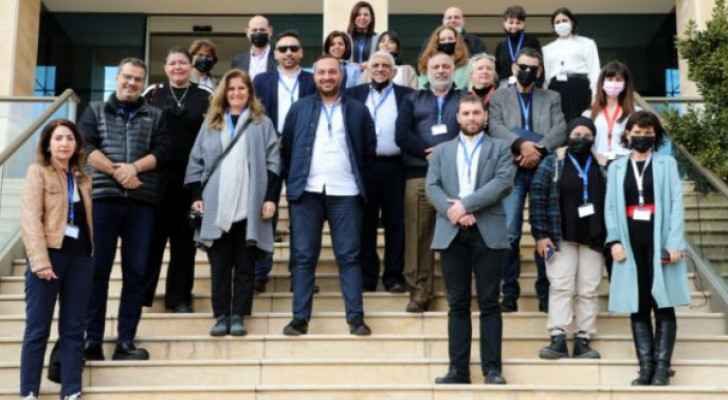 Tuesday, 50 Jordanian journalists and media professionals met on Feb. 15, 2022 during a full and enriching workshop organized by the French association "Journalism & Citizenship" in cooperation with the Jordan Media Institute (JMI) and with the support of the European Union.

The aim of this event was to talk openly about the concrete problems faced by Jordanian media and journalists and to collectively explore possible practical solutions to these difficulties.

How to produce and provide reliable and qualitative information to the citizens was the question at the heart of the discussions.

In Jordan, like in many countries, the traditional and new media are now facing economic difficulties and also register a lack of interest or even mistrust by citizens.
A reaction is needed from all parts of the media sector, authorities, international donors, to support media serving the public interest and provide useful and reliable information to the audiences.

Even if the Jordanian media scene has deeply changed over the last 20 years, the media and journalists still have a lot to do to regain the trust of the citizens and play the role that is expected from them: produce and disseminate reliable and qualitative information to the Jordanian citizens.

Different topics were discussed during this unique event: How journalists can be a solution in the fight against disinformation; How to improve and review the media laws to sustain a professional and reliable environment for Jordanian Medias; How to make the access to official datas easier for the journalists, especially for female journalists who are often victims of unconsidered comments; How to stimulate innovation in the media sector; How to meet the expectations of the audiences and, of course, how to think about a limited fees on licensing for not-profit media organizations; How to make media more economically sustainable and how to imagine the creation of a Basket Fund managed by all parties (medias, government, international donors) in total transparency.

This workshop was an opportunity to meet and discuss with the international donors, such as the European Union and several foreign embassies, involved in media and journalism support in Jordan. The media actors presented their recommendations and their real needs, followed by a rich discussion.

As many programs supporting Jordanian media and journalists have been implemented in the last decades, it is the right moment to question the impact of these programs and to find the most effective way to continue this international support.

The conclusions of this workshop will be discussed next month at the Journalism Forum in Tunis organized by “Journalism & citizenship” association which will bring together journalists and citizens from all over the MENA region, and also from Europe and Sub-Saharan Africa. During this occasion, Jordanian speakers will have the opportunity to share the experiences of the Hashemite Kingdom in innovating with media contents or formats and in Media Information Literacy.

This workshop was part of a regional EU program to support Media serving the public interest in several countries including Jordan and implemented by the French Association “Journalist and citizenship.”

“Journalisme & Citoyenneté” is a French non-profit NGO, created in 2006, aiming to promote the exchange and the debate between media professionals, citizens and key-players of the media systems in an attempt to define the conditions for a good media production and the dissemination of reliable and quality information to the citizens. With the support of the European Union, “Journalisme & Citoyenneté” is carrying out a study on the challenges facing the journalists and the media actors in Southern region in the framework of a 4-year project aiming to open dialogue with civil society on their expectations in terms of information and to promote support for freedom of expression and independent media as a priority for donor’s agendas in the region.

'Shireen Abu Akleh may have been killed by Israeli Defense ....

'Shireen Abu Akleh may have been killed ....