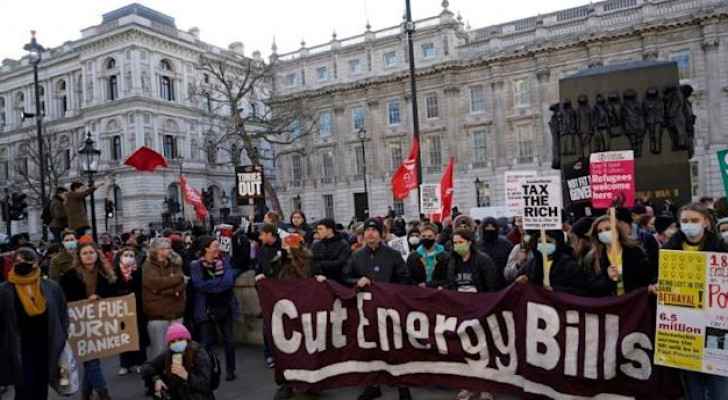 Hundreds of people took part in demonstrations Saturday in London- and similar rallies took place in other cities of the United Kingdom- to protest against the high cost of living, which affects especially low-income families.

In the capital, the demonstrators marched behind a black banner calling for "reducing the energy bill," while another banner called for "price freezing, not the poor," in reference to the high cost of energy that forces low-income families not to heat their homes.

Former Labor leader Jeremy Corbyn participated in the demonstrations, which took place at the invitation of the People's Assembly, an anti-austerity movement backed by several unions.

Other demonstrations are scheduled to take place in the rest of the United Kingdom, from Glasgow (Scotland) to Cardiff (Wales) via Manchester (Northern England).

A demonstrator in Glasgow held a banner reading, "Maybe if I had saved for wine and cheese, this would have helped me keep my lamps on," in reference to the parties that were held at the Cabinet headquarters despite health restrictions imposed to combat Covid-19, which sparked a scandal and led to a decline in the popularity of Boris Johnson.

"The working classes should not pay the price for a crisis they did not cause," Laura Peacock, National Secretary of the People's Assembly, wrote on Twitter.

Britain's trade union TUC warned Monday that low-income workers were facing a "very difficult period" due to the rising cost of living.

The union confirmed in a report that the number of workers benefiting from "universal credit", the assistance allocated to the unemployed or those with low wages, increased by 1.3 million people compared to the number before the Covid-19 pandemic.

A study of the British Trade Union Confederation of 2,200 workers shows that 12.5 percent of them say they will face difficulties in securing their needs.

The Bank of England warned that inflation, which reached a 30-year high in the UK of 5.4 percent at the end of 2021, could rise to 7.25% by April and is unlikely to return to its normal levels two years ago.

Death toll from Iran unrest climbs to 17 as internet ....