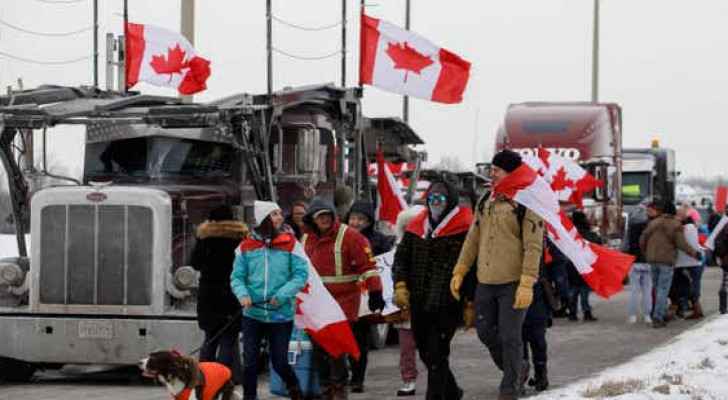 Trucker-led protests against coronavirus restrictions in Canada have inspired copycat movements as far afield as Europe and New Zealand.

As Canadian Prime Minister Justin Trudeau says "everything is on the table" to end the Canadian blockade, and thousands of vehicles head to Paris, here is a global snapshot.

Canada's self-styled "Freedom Convoy" began late January in the country's west, sparked by anger that truckers had to either be vaccinated, or tested and isolated, to cross the US-Canada border.

While the vast majority of the country's truckers are vaccinated, for two weeks a group of angry anti-vaxxers and loosely allied truckers have blocked the center of the capital Ottawa with loud and often rowdy protests.

The movement has morphed into a broader protest against pandemic health rules and Justin Trudeau's government.

Over the past week they have also blocked three major border crossings with the United States, causing significant economic disruption.

The shutting down of the Ambassador Bridge in Detroit -- used daily by more than 40,000 commuters and trucks carrying US$323 million worth of goods on average -- has caused particular chaos.

Major carmakers have been forced to cut back production at several plants in the region as a result.

The epicenter Ontario province on Friday declared a state of emergency. Trudeau said: "Everything is on the table because this unlawful activity has to end and it will end."

US Secretary of Homeland Security Alejandro Mayorkas has called on Canada to use federal powers to resolve the situation at the border.

In New Zealand activists have been camped on the lawns of parliament in Wellington for four days in a protest that began Tuesday as a copycat of the Canadian convoy.

The protest turned ugly Thursday, with police clashing with demonstrators and more than 120 people arrested.

Protester numbers swelled to nearly 1,500 Friday as police scaled back efforts to clear the demonstrators.

Thousands of vehicles were closing in on Paris on Friday in convoys from across France, with many hoping to blockade the capital to protest Covid vaccination rules and other restrictions.

The French protesters set off from Bayonne, Perpignan, Lyon, Lille, Strasbourg and elsewhere.

Paris police sought to prevent the demonstration, saying they would ban the convoys and would stop roads from being blocked, threatening hefty fines or jail.

Belgian authorities also said they would ban the convoys that have been announced to converge on Brussels on Monday, according +3to a call to protest circulating on social media.

Austrian police on Thursday announced a ban on any "Freedom Convoy", after reports that several hundred vehicles were set to converge Friday in central Vienna and near a major public park in the Austrian capital.

American supporters of the Canadian protesters have taken to social media announcing a "People's Convoy" of truckers and "all freedom-loving Americans" to gather east of Los Angeles for a two-day rally beginning March 4 before hitting the road, possibly towards the capital Washington.