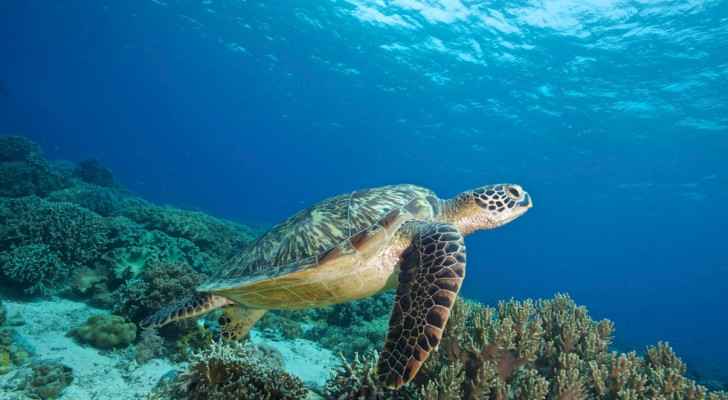 Some 30 heads of state and government pledged Friday in France to better protect the biodiversity-rich oceans essential to controlling the climate by looking after the high seas and combating the invasion of plastics.

In 2022, several important international meetings on the oceans will be organized.

"Today's mobilization has allowed for the dedication of many commitments and new alliances that include parties from the private, public and state sectors," French President Emmanuel Macron said at the end of the summit in the port city of Brest in northwestern France.

The political officials who succeeded in speaking during the Brest Summit, either in person or by default, made commitments on the level of several files, including moving towards reaching international treaties to protect the high seas and combat plastic pollution.

Other state leaders made their interventions remotely.

"If we allocate the appropriate means, we can take historic decisions. That day must begin in Brest," Macron stressed.

In a major development, von der Leyen announced the launch of a coalition of 27 EU member states and 13 other countries to conclude an ambitious treaty aimed at protecting the high seas that are not under the sovereignty of any state.

Negotiations for such a treaty have been under the auspices of the United Nations since 2018, but talks have been suspended due to the Covid-19 epidemic. A fourth and theoretically final round of negotiations is scheduled to take place in New York in March.

"We are very close to the agreement, but we must give impetus to its completion during the current year," the European official said.

Peggy Callas of the High Seas Alliance, which includes several NGOs, welcomed the announcement, saying, "This is a huge and welcome commitment."

For its part, the United States announced its support for launching negotiations under the auspices of the United Nations to reach an international treaty to combat pollution caused by plastics. It joined about ten countries and all members of the European Union.

It will discuss initiating these negotiations during the Fifth Assembly of the United Nations on the environment at the end of February in order to reach an international treaty to combat pollution caused by 8.3 billion tons of plastic produced since the fifties of the last century.

"We need an agreement that is incredibly ambitious," Kerry said.

President of French Polynesia, Edouard Fritsch, announced Friday the project to establish a "marine protected area on more than 500,000 square kilometers" and areas designated for coastal fishing at a similar distance.

Other topics were discussed, such as reducing greenhouse gas emissions in the marine sector not covered by the 2015 Paris climate agreement as well as eliminating official subsidies that encourage overfishing and illegal fishing, prompted by Emmanuel Macron. The latter topic is discussed in the framework of the World Trade Organization.

Macron also promised to do more to protect the turtles, with measures to prevent them from getting caught in fishermen's nets. Isabelle Otissier, President Emeritus of WWF France, welcomed the announcement "with caution about the actual implementation of this promise."

Non-governmental organizations believe that France, the second world naval power, has not taken sufficient measures to protect its seas and oceans well. About 150 people gathered in Brest at the invitation of "Greenpeace" and the association "Pleine mer" to denounce "the blue washing operation."

Emmanuel Macron "declares that he is a defender of the oceans, but he does nothing and even defends very destructive industrial activities," Francois Chartier, an official with the French branch of Greenpeace, told AFP.