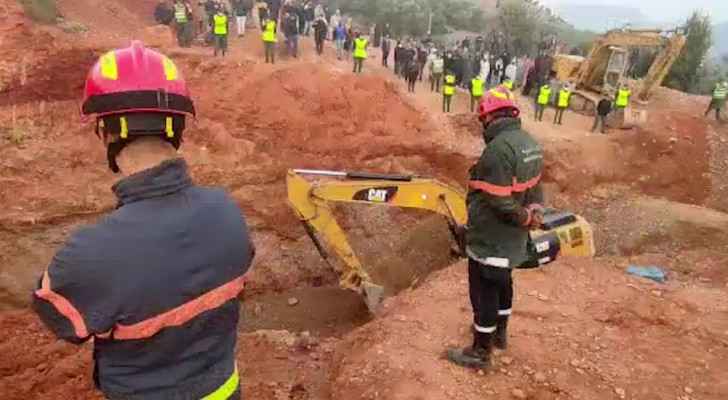 Moroccans waited anxiously Thursday as authorities said a dramatic operation to rescue a young boy trapped in a deep well for over two days was nearing its end.

The five-year-old, named Rayan, fell down a narrow deep well on Tuesday evening in his home village near Bab Berred in the rural northern province of Chefchaouen, local media said.

"The child's rescue is approaching," government spokesman Mustapha Baitas said Thursday. "Our hearts are with the family, and we are praying that he will back with them as soon as possible."

The shaft was too narrow for rescuers to reach the bottom, so heavy diggers were dispatched to dig a hole alongside it.

Relief operations intensified as darkness fell for a third night with the boy deep down in the well, with diggers clawing out dirt under floodlights.

Rescuers reported they had dug down some 24 meters, but that around six meters still remained to reach the child.

The MAP news agency said rescuers had been able to send him oxygen and water via pipes.

Rayan's father told Le360 news website he had been repairing the well when the boy fell into it.

Lead rescuer Abdelhabi Temrani told Al Oula television that the diameter of the well was less than 45 centimeters.

Baitas said the nature of the soil meant it was too dangerous to try to widen the hole, meaning major excavations around it were the only solution.

The drama has sparked an outpouring of sympathy online, with the Arabic hashtag #SaveRayan going viral across the North African region, including in neighboring Algeria.

Moroccan footballer and PSG star Achraf Hakimi mentioned the rescue efforts on social media, alongside emojis of a broken heart and hands together in prayer.

The boy's fate has also attracted crowds of people to the site of the operation, putting pressure on rescuers operating in "difficult conditions", Baitas said.

"We call on citizens to let the rescuers do their job and save this child," he said.

Authorities have also prepared a helicopter to take the child to hospital once he is extracted, national news channel 2M said.