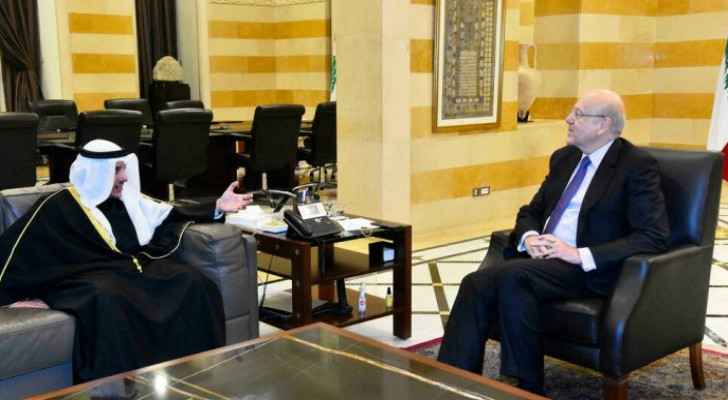 Kuwait's foreign minister said Sunday that he has given Lebanese authorities a list of suggested measures to be taken to ease a diplomatic rift with Gulf Arab countries.

The proposal was delivered to Lebanon's Prime Minister Najib Mikati and President Michel Aoun during a visit by Kuwaiti Foreign Minister Sheikh Ahmed Nasser al-Mohammed Al-Sabah, the first to Lebanon by a senior Gulf official since a spat erupted last year.

The visit, coordinated with Gulf Arab states, is part of wider efforts to restore trust between Lebanon and its Gulf Arab neighbors as the country grapples with an unprecedented financial crisis.

A list "of ideas and suggestions was presented yesterday and mentioned again today to the president," Sheikh Ahmed told reporters Sunday after meeting with Aoun.

"We are now waiting for a response from them on these suggestions," he added, refusing to elaborate on the proposed steps.

Mikati was also invited to visit the oil-rich emirate, he added, without specifying a date.

In October, Saudi Arabia and its allies suspended diplomatic ties with Lebanon after the airing of comments by then information minister Georges Kordahi criticizing a Saudi-led military intervention in Yemen.

Kuwait recalled its ambassador from Beirut and also asked Beirut's charge d'affaires to leave the emirate.

Last month, Kordahi resigned in a bid to ease the standoff and French President Emmanuel Macron said Paris and Riyadh had agreed to fully engage to restore diplomatic ties.

But tensions have persisted, mainly over the powerful Lebanese Shiite movement Hezbollah, which is backed by Saudi's arch-rival Iran.

Earlier this month, Saudi Arabia's ambassador to Beirut called on Lebanese political parties to "end Hezbollah's terrorist hegemony over every aspect of the state."