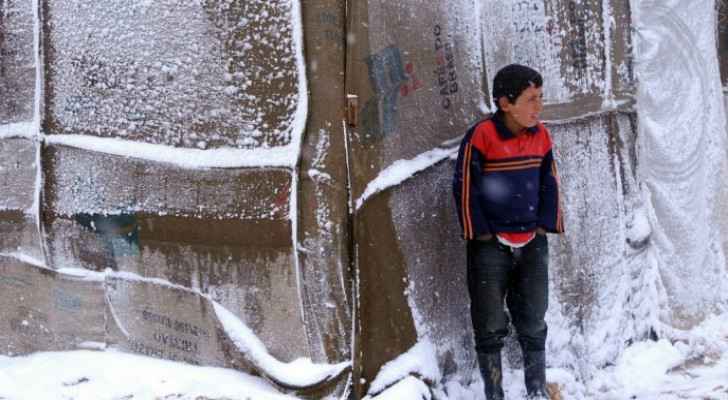 Three Syrian children died of severe cold, while hundreds of thousands of people were at "great risk" in the wake of severe winter storms that struck Syria and neighboring countries, according to the humanitarian organization CARE.

In a report, the organization warned that the onslaught of severe winter storms exacerbates the living situation of the displaced Syrians, as well as the Syrians living in Lebanon and Jordan, where “temperatures are expected to drop lower than they have in 40 years, reaching -14 degrees Celsius (6.8 Fahrenheit) and lower.. ', according to the CNN website.

According to the United Nations Office for the Coordination of Humanitarian Affairs (OCHA) in Turkey, winter storms destroyed 362 tents and affected 2,124 displaced Syrians living in camps in Syria, noting that a child in a camp in Qastal Miqdad in Afrin city died when a tent toppled on him due to the accumulation of snow. The mother of the child is in the intensive care unit.

Also, two children, aged 3 and 5, were killed, Monday morning, in a camp in northern Aleppo, Syria, when a fire broke out in their tent due to a heater. The mother of the two children was injured with serious burns and was taken to hospital, according to the White Helmets organization.

The cold weather caused a sharp drop in the body temperature of two children in Bulbul camps in Syria. The United Nations Office for the Coordination of Humanitarian Affairs said the two children were currently receiving treatment in a hospital in Afrin, Syria.

CARE said that refugees in Lebanon live in large areas of informal settlements, where they lack adequate protection.

The director of the organization in Lebanon said, "People are unemployed and have no income. They are already suffering from the consequences of an unprecedented economic crisis in Lebanon and they have no way to protect themselves from the expected snowstorms."

Person arrested after trying to infiltrate from Syria into ....

Person arrested after trying to infiltrate from ....

Person arrested after trying to infiltrate from ....

'If UNRWA stops providing its services, we will face a ....

'If UNRWA stops providing its services, ....