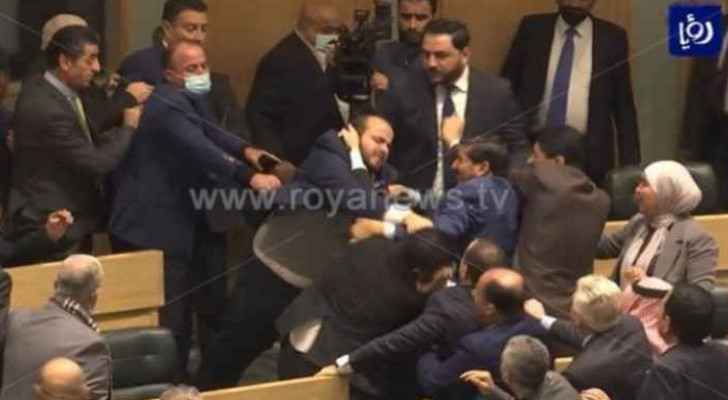 Today, Monday, the House of Representatives voted on the recommendation of the Legal Committee to freeze the membership of Representative Hassan Al-Riyati for a period of two years, and approved it.

73 out of 117 MPs voted in favor of suspending MP Riyati for two years.

This decision comes after the fight that happened between the MPs a few weeks ago that turned the House of Representatives into a “wrestling ring.”

The session had been scheduled to discuss the draft amendment to the Jordanian Constitution for the year 2021, after its approval by the Legal Committee.

However, clashes and verbal altercations erupted during a debate on an amendment that included adding the female noun for a Jordanian citizen, to a chapter in the constitution guaranteeing equal rights of all citizens. Following that, several MPs angrily disputed the amendment, saying it is "useless."

Eventually, the House of Representatives approved adding the female noun for a Jordanian citizen to Article VI of the constitution, following the recommendation of the Royal Committee for the Modernization of the Political System.

Today’s session was the first one Riyati has attended after he was asked not to attend. In a parliamentary memorandum, a number of members of the House of Representatives had demanded that MP Hassan al-Riyati be banned from being under the parliament’s dome.