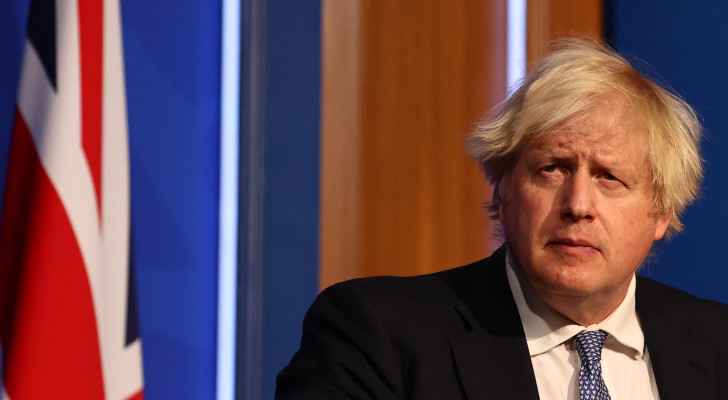 The British government apologized Friday to Queen Elizabeth II for hosting a party on the eve of her husband Philip's funeral, while the country was under lockdown measures.

A spokesman for Boris Johnson leader said: "It is very unfortunate that this is happening at a time of national mourning and 10 Downing Street has apologized to the palace."

The letter addressed to the 95-year-old queen was sent by phone through official channels, though Johnson did not send it personally, as he is under increasing calls to resign after a series of similar allegations.

Prince Philip's funeral at Windsor Castle was limited to just 30 people due to government rules to tackle the pandemic, forcing the Queen to sit alone in a chapel to mourn.

Hours before the funeral, a similar number of Johnson's staff threw two separate parties, with music and dancing, buying bottles of liquor from a supermarket and secretly bagging them into Downing Street.

But Johnson, who is in self-quarantine due to contact with a family member with Covid, was at his official residence in Checkers at the time, his spokesperson said.

He declined to say whether Johnson was aware of the two parties and indicated that an internal investigation would establish all the facts about the "party scandal" allegations.

Johnson's resignation was demanded by the three main opposition parties, and some Conservative MPs joined calls for his resignation after he apologized Wednesday for attending an event in May 2020.

Meanwhile, Andrew Bridgen on Friday became the latest member of Parliament to say he submitted a letter of no confidence in Johnson to an influential committee of Tory MPs.

And if 15 percent, or 54 of the 360 Conservative MPs, do the same, it will lead to an internal leadership dispute, if Johnson does not resign on his own.

The Daily Telegraph reported that up to 30 MPs have sent similar messages so far.

Bridgen, the fierce supporter of Brexit that brought Johnson to power in 2019, wrote in The Telegraph that there is currently a "moral vacuum at the heart of our government."

Most cabinet members rallied to support Johnson, but support for potential successors such as Finance Minister Rishi Sunak has been conspicuously tepid.

Johnson's former media director, James Slack, apologized for the "anger and hurt" caused at his departure party on April 16.

Slack, who is deputy editor-in-chief of The Sun, said he took "full responsibility" and was "deeply sorry."

The party was reportedly held to coincide with another event marking the departure of one of Johnson's personal photographers, which included drinking alcohol and dancing to music late into the night.

The newspaper reported that an employee went to a nearby store with a bag to fill with bottles of wine.

Government guidance at the time prohibited gatherings except for family gatherings. This has left thousands of families unable to visit loved ones who are sick with Covid or even attend their funerals.

Security Minister Damian Hinds said he was "shocked" by the latest allegations but asked people to wait for the outcome of the investigation.

Angela Rayner, deputy leader of the opposition Labor Party, and others took advantage of the revelations, saying it showed a culture of double standards at the heart of the government.

"The Queen sat alone at (her husband's) funeral, as many did at the time, bearing the trauma alone with the aim of sacrifice and adhering to the rules in the national interest," Rayner said.

For her part, Fran Hall of the group "Bereaved Families for Justice" said, "The people who run the country doing this and then lying about it shows complete contempt for the public."

Voters in Johnson's constituency in northwest London were not sympathetic.

"People have failed, especially people who have suffered in some way during this pandemic," he added.

Also, Veronica Machu, another Conservative party voter, explained that "people are angry", but expected that "Johnson will continue to apologize" and try to hold on to his position.

A YouGov poll for The Times showed Labor advanced by 10 points for the first time in nearly a decade, and six out of 10 voters said they believed Johnson should resign.