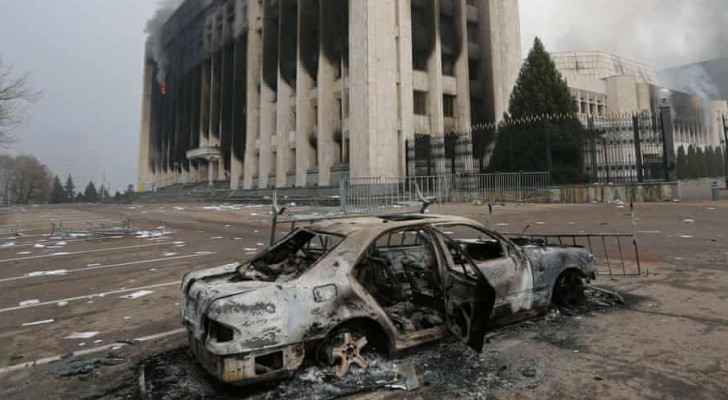 Kazakhstan's president said Friday that order had been mostly restored in the country after days of unprecedented violence that saw a Moscow-led military alliance send troops to help quell unrest.

The interior ministry said security forces had taken all the country's regions "under increased protection" and that 26 "armed criminals" had been killed and 18 wounded in the unrest.

"The constitutional order has been mainly restored in all regions," President Kassym-Jomart Tokayev said in a statement after meeting with top officials.

"But terrorists are still using weapons, causing damage to civilian property," he said.

"The counter-terrorist operation will continue until the total destruction of the militants."

Tokayev confirmed that a peacekeeping force from the Russia-dominated Collective Security Treaty Organisation (CSTO) had arrived in Kazakhstan.

He said it would stay "for a limited period" and ensure "the protection of strategic facilities."

Tokayev was due to make an address to the nation -- his third this week -- later on Friday.

Long seen as one the most stable of the ex-Soviet republics of Central Asia, energy-rich Kazakhstan is facing its biggest crisis in decades after days of protests over rising fuel prices escalated into widespread unrest.

Protesters stormed government buildings in the largest city Almaty on Wednesday and fought running battles with police and the military, with officials saying 748 security officers were wounded and 18 killed, including two who had been decapitated.

Tokayev declared a nationwide state of emergency and appealed for help from the CSTO, which includes five other ex-Soviet states, to combat what he called "terrorist groups" that had "received extensive training abroad."

Fighting had continued in Almaty on Thursday, with an AFP correspondent hearing bursts of gunfire from the direction of the city's main square.

Local media reports said late on Thursday that security forces had cleared demonstrators from the square and other key government buildings.

The first units of Russian forces from the Moscow-led peacekeeping force had arrived in Kazakhstan, the Russian defence ministry said, after Tokayev appealed for assistance on Wednesday.

It marked the alliance's first major joint action since its founding in 1999.

Russia said it saw the unrest as "an attempt inspired from outside to undermine the security and integrity" of Kazakhstan.

The interior ministry said Thursday it had detained about 2,300 people.

Officials said more than 1,000 people had been wounded in the unrest, with nearly 400 admitted to hospital and 62 in intensive care.

Protests spread across the nation of 19 million this week in outrage over a New Year increase in prices for liquid petroleum gas (LPG), which is used to fuel many cars in the country.

Thousands took to the streets in Almaty and in the western province of Mangystau, saying the price rise was unfair given oil and gas exporter Kazakhstan's vast energy reserves.

The full picture of the chaos was often unclear, with widespread disruptions to communications including mobile phone signals, the blocking of online messengers and hours-long internet shutdowns.

The protests are the biggest threat so far to the regime established by Kazakhstan's founding president Nursultan Nazarbayev, who stepped down in 2019 and hand-picked Tokayev as his successor.

Tokayev tried to head off further unrest by announcing the resignation of the cabinet early on Wednesday, but protests continued.

Authorities declared a nationwide state of emergency until January 19, with curfews, restrictions on movements and bans on mass gatherings.

The government made another concession on Thursday, setting new fuel price limits for six months, saying "urgent" measures were needed "to stabilise the socio-economic situation."

Much of the anger appeared directed at Nazarbayev, who is 81 and had ruled Kazakhstan since 1989 before handing power to Tokayev.

Many protesters shouted "Old Man Out!" in reference to Nazarbayev, several witnesses confirmed to AFP that a statue of the ex-leader had been torn down in the southern city of Taldykorgan.

Western countries have called for restraint on all sides, with US State Department spokesman Ned Price warning Russian troops in Kazakhstan against taking control of the country's institutions.

"The United States and, frankly, the world will be watching for any violation of human rights," Price said.