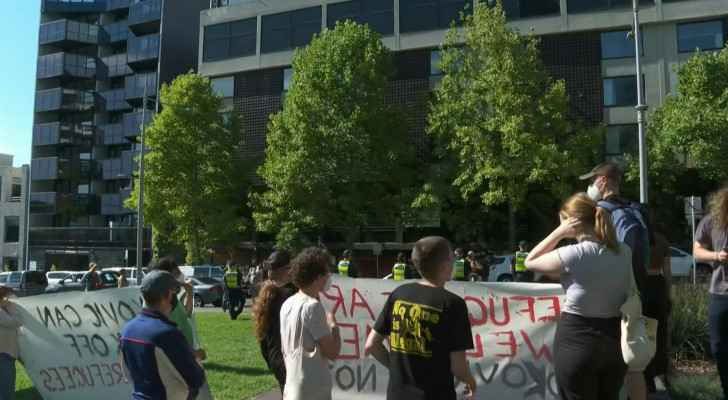 Novak Djokovic's fans rallied in the rain Friday to protest the tennis superstar's shock detention in Australia, a development that reverberated globally and sparked an angry reaction from Serbia.

About 50 protesters -- a mix of tennis fans, anti-vaccine demonstrators and immigrant rights activists -- congregated on Orthodox Christmas Day at a detention facility in Melbourne.

"We come out to support him just because it's our Christmas and obviously he's going through a lot," said fan Sash Aleksic on the sodden street outside the building.

"There would obviously be a lot more people here if people did not have family obligations today."

It is believed the world's top tennis player is among them, although border authorities have refused to confirm where Djokovic is detained.

The five-storey centre gained notoriety last year when a fire forced migrants to be evacuated, and maggots were allegedly found in the food.

Djokovic was held after arrival in Australia this week -- his visa revoked for failing to meet the country's tough pandemic restrictions.

Foreigners are still mostly banned from travel to Australia, and those granted entry must be fully vaccinated or have a medical exemption.

Australian authorities said the 34-year-old Serbian star -- who has declared himself against vaccines and claimed to have an exemption -- provided evidence of neither and was detained, pending deportation.

Djokovic secured an exemption to play in the Australian Open this month. But the Australian government said he did not meet the stricter standard required to enter the country.

In fiery remarks at a Belgrade rally, his father Srdjan Djokovic told a crowd his son was the victim of a "political witch hunt" and "corona fascism."

"Jesus was crucified and endured many things but is still alive among us," he said on Orthodox Christmas Eve. "Novak is also crucified... the best sportsman and man in the world."

His mother Djina Djokovic told reporters at the rally: "They are keeping him as a prisoner. It is just not fair. It is not human."

Many Australians, who have endured nearly two years of travel bans and lockdowns, were outraged when they learned the player was given a vaccine exemption.

Tennis players seemed divided, but some rallied around Novak.

"Look I definitely believe in taking action, I got vaccinated because of others and for my mum's health, but how we are handling Novak’s situation is bad, really bad," said Australian star Nick Kyrgios.

"This is one of our great champions but at the end of the day, he is human," he said on social media.
Djokovic had landed in Melbourne on Wednesday hoping to defend his Australian Open crown and seal an unprecedented 21st Grand Slam title.

Although he won a legal reprieve from deportation until at least Monday, when his attempt to overturn his visa cancellation will be heard in court, it is unclear whether he will play in the January 17-30 tournament.

Judge Anthony Kelly warned the star's lawyers in a hearing Thursday that justice would move at its own pace through all necessary appeals. "The tail won't be wagging the dog here," he said.

She also denied allegations that Djokovic was being held against his will.

"He is free to leave at any time that he chooses to do so and Border Force will actually facilitate that," she said.

"Djokovic is not a criminal, terrorist or illegal migrant, but was treated that way by the Australian authorities which causes an understandable indignation of his fans and citizens of Serbia," a foreign ministry statement said.

The country's president, prime minister and foreign minister have issued a series of nationalist-tinged remarks brimming with anger at the treatment of the national hero.

"Rules are rules and there are no special cases," he said.

John Findley, an Australian immigration lawyer, said both the state and Djokovic would have to answer tough questions in court.

"If they see (Djokovic) has provided false information, he must have a chance to answer that," Findley said.

That charge, if proven, could bring a three-year ban from applying for another Australian visa.

But Findley also said the revocation seemed to have come from "a pile-on from social media" and the government would need to explain the legal bar that Djokovic failed to meet.