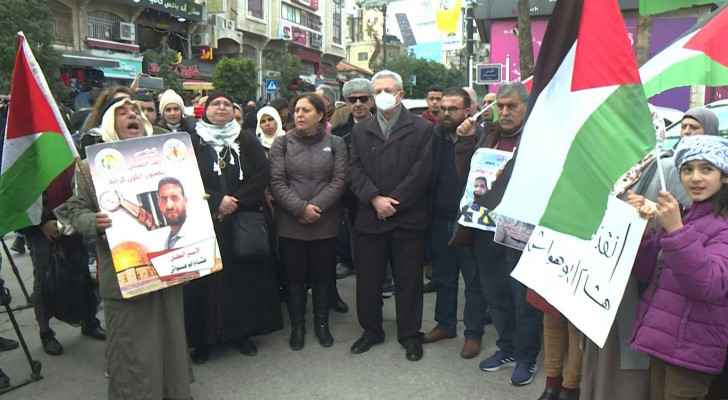 Palestinians demonstrated in Ramallah to demand the release of the prisoner Hisham Abu Hawash.

Abu Hawash, 40, began refusing food in August to protest the Israeli Occupation holding him without charges or trial.

The married father of five from Dura in the occupied West Bank was being held under administrative detention, a practice of arresting suspects for renewable six-month terms without allowing them to view the charges or evidence against them.

"His condition is difficult and complex," Liad Aviel, spokesman of the Shamir Medical Center in central Israeli Occupation where Abu Hawash is being held, told AFP.

According to the ICRC, Abu Hawash has been refusing food for around 140 days.

It issued a statement warning of "potentially irreversible health consequences and possible tragic loss of life".

His wife, Aisha Hrebat, told AFP on Sunday he was in a "very dangerous" situation, adding that "since yesterday he can't talk at all and doesn't know what's going on around him".

"Even after he ends his strike, he will have difficult problems," she said, adding their lawyer was submitting an urgent appeal against his detention to the Israeli Occupation's supreme court.