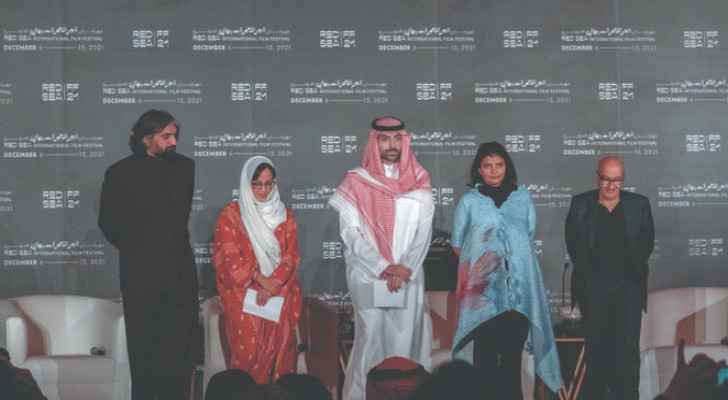 When Firouzeh Khosrovani stood up to introduce Radiograph of a Family prior to its Arab premiere in Jeddah, the Iranian director expressed the hope that the Red Sea International Film Festival would act as a cultural bridge. Not just between the two countries, which have experienced tense and often strained relations, but between all nations in the region.

“As an Arab festival – and a very fantastic, prestigious first edition –

I think there’s a hope that we can have some cultural exchange,” says Khosrovani.

“We have many things in common, there are many similarities in our region in terms of culture, so for me it's important.Maybe the festival could become a mirror of our complex realities… We are in the united states of cinema and it is something that is beyond all political, social or sociopolitical issues.”

Khosrovani's Radiograph of a Family is one of three Iranian films screening at the festival. Asghar Farhadi's A Hero, which won the Grand Prix at Cannes in May, is being shown alongside Khosrovani's documentary in the Festival Favorites section, while Panah Panahi's Hit The Road is vying for awards as part of the Red Sea: Features Competition.

The very fact that any Iranian films are being screened at all could be considered bold decision making by the festival's organisers. Radiograph of a Family's subject matter – the Islamic Revolution's transformation of the director's own family and the struggle between secularism and Islamic ideology – would have been a no-go area just a few, short years ago. But, as the large poster at the entrance to Jeddah's historic district states, 'Waves of Change' are sweeping across the Gulf kingdom.

A personal passion project, the documentary tells the story of Khosrovani's religiously devout mother Tayi, who moves to Switzerland to be with her Hossein, a secular husband and liberal radiologist who drinks, listens to music, and appreciates art. On their return to Tehran, however, it becomes increasingly clear that her mother's traditional Islamic beliefs are at odds with her father's secular way of life.

“I'm happy I made the film with the right distance between me and my past,” admits Khosrovani, who picked up IDFA's Best Feature Length Documentary award last year. “I really experienced very tough days with the story – my story – but it was also challenging to find this individual experience linked to collective experience.”

As the Islamic Revolution takes hold, the country's political and social balance of power begins to shift. That shift is mirrored within Khosrovani's own family, as her mother becomes a 'full revolutionary Muslim' and her father, no longer able to live the liberal life he once did, slowly retreats into the shadows. As Khosrovani says, the revolution gave her mother the role of an Islamic combatant, ultimately leading to a revolution taking place in her own home. Prayer replaced music, the past was censored, and red wine banished.

To tell this story, Khosrovani has almost relied entirely on archive material, including Super 8 footage, personal correspondence, and 140 family photographs. Some pictures, which depict Tayi's brief daliance with liberalism in Europe, have been stitched back together by the director after being ripped up by her mother. And although the use of photography is largely formal, Khosrovani has employed re-imagined dialogue to help tell her family's story.

“If it was a classic documentary I would have interviewed my mother, but that is another film,” says Khosrovani, who lives between Tehran and Rome. “Sometimes we found images and we developed a concept around them as a pattern in the film, and sometimes we had a concept and tried to find some footage for it. So it was back and forth between image and words.”

One of the difficulties, explains the director, was previously finding unseen footage of the revolution. “We put a lot of time and effort into looking for unofficial images,” she says, “and the footage of the revolution and of the demonstrations that we use was shot by a very good artist in Iran when he was very young. It is Super 8 and we wanted to include like a texture. It could be any revolution – the wave of the people – so we had an artistic look on everything.”

“I think, like any child, I have something from to my mother and something from to my father,” she adds. “I think some of my artistic values – the love for art and music and painting – comes from my father. But there are many things I appreciate about my mother. She's very persistent, she's a very strong woman, and she influenced a lot of students when she was a principal of a school. And still she’s a very person influential in a group a people.”

As for her father, “he knew his turn was over and it was the time of others”, says Khosrovani. "The majority of Iranians were traditionalist and religious, so it was their time."