An airstrike on Gaza. 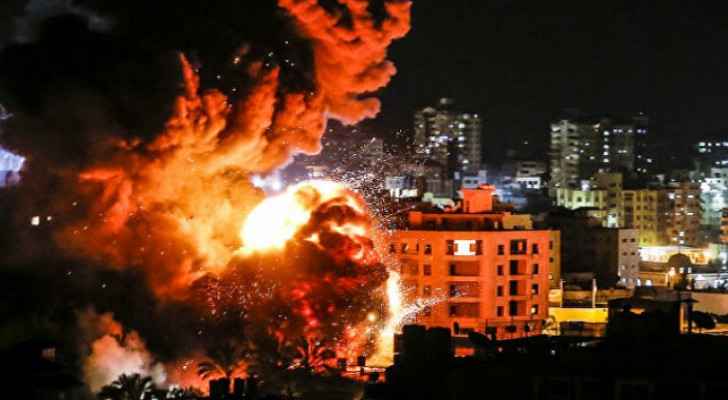 A Dutch appeals court ruled Tuesday that the Israeli Occupation’s Defense Minster, Benny Gantz, is immune from prosecution in a case brought by a Palestinian man holding him responsible for the deaths of his six relatives who died in a 2014 Gaza air strike.

Ismail Ziada sought damages for war crimes after losing his mother, three brothers, a sister-in-law, a young nephew and a friend in the strike during Israeli Occupation's Operation Protective Edge targeting Gaza.

But appeals judges upheld a decision by a lower court in January 2020 that the Netherlands has no jurisdiction in the case against Gantz and a former air force chief.

"Dutch courts are not competent here to judge the claim. The (lower) court rightly decided that," said judge S.A. Boele of The Hague appeals court as he read out the decision.

"High-ranking military personnel have carried out official policy of the state of Israel, which renders a judgment on their actions moribund."

Gantz, who has been a defense minister since last year, was the chief of general staff of the Israeli Occupation force at the time of the air strike on the Bureij refugee camp in Gaza on July 20, 2014.

They both had argued that it was against international law for one state to rule on the conduct of another.

The Dutch appeals court agreed with them.

"Customary international law means that they can invoke immunity from jurisdiction in this civil case," it said.

"No exception is made if it is alleged that crimes against humanity or war crimes have been committed."

Ziada, who was originally from the Palestinian territories but now has Dutch nationality, had accused the two of war crimes and crimes against humanity.

The court said that it was "not blind to the plaintiff's suffering" but that it could not accept his arguments.

It ordered him to pay more than 3,800 euros in legal costs.

At a previous hearing, Ziada told judges he was "seeking justice" in the Netherlands because of his Dutch nationality, and would not get a fair hearing before an Israeli Occupation court.

Israeli Occupation said it launched Protective Edge at the time to stop rocket fire against its citizens and destroy tunnels used for smuggling weapons and militants.

Earlier this year Gantz vigorously defended his county’s airstrikes on Gaza in response to rocket fire from the territory, ruled by Hamas.

The airstrikes from Israeli Occupation against Gaza in May this year killed 248 people including 66 children, and wounded more than 1,900 others, according to the Gaza health ministry.

Destruction of Gaza's only COVID-19 testing ....

Destruction of Gaza's only COVID-19 testing ....