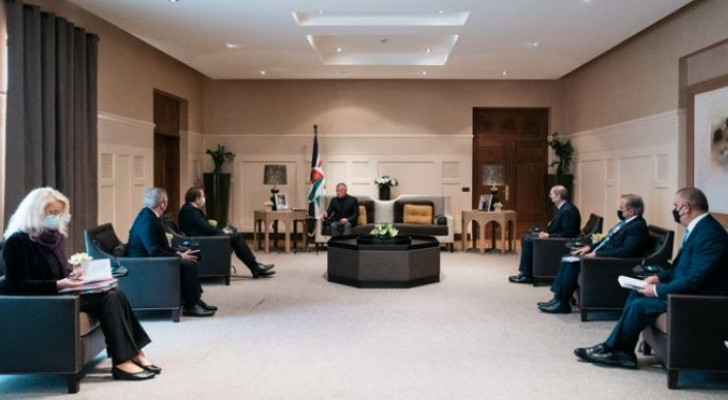 During the meeting, they discussed aspects of cooperation between Jordan and the European Union in various fields, in addition to the latest regional developments.

His Majesty the King expressed his appreciation for the support provided by the European Union to the development and reform programs implemented in Jordan.

The King stressed his keenness to expand horizons of cooperation and partnership between Jordan and the European Union.

The meeting dealt with ways to coordinate efforts to confront the coronavirus pandemic, as His Majesty stressed the importance of the European Union's economic investment plan in supporting the efforts made by the Kingdom to achieve economic recovery from the pandemic, as well as supporting regional projects.

Meanwhile, the European Commissioner praised Jordan's efforts in hosting refugees and providing them with services, stressing the Kingdom's huge role in establishing security and stability in the region.

He expressed the European Union's support for Jordan's efforts in facing economic challenges, referring to the strategic partnership between them.

The meeting was attended by Deputy Prime Minister and Minister of Foreign Affairs and Expatriates, Ayman Safadi, Director of His Majesty's Office, Jaafar Hassan, and Minister of Planning and International Cooperation Nasser Al-Shraideh.