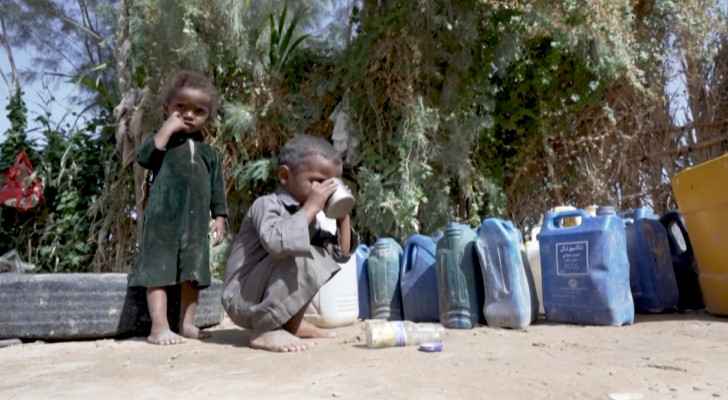 Forced to flee fighting in Yemen's brutal war, Yehya Hayba and his family find themselves crammed into a desert tent with dozens of others, fearing the onset of winter.

Hayba, his wife and their seven children escaped to the Al-Sumya camp east of Marib city, the government's last northern stronghold, after clashes escalated nearby.

The family, displaced for the second time in the seven-year civil war, have nothing but two blankets to keep them warm during the cold nights.

"It is part of the Empty Quarter desert. There are no humanitarian services, no schools, no hospitals or any other services," Hayba, 39, told AFP.

Al-Sumya, with its clusters of makeshift tents, has witnessed an influx of displaced people, with hundreds arriving in a month, according to the International Organization for Migration.

The camp, with scant resources, bears testament to a conflict that has forced millions from their homes, creating what the United Nations calls the world's worst humanitarian crisis.

"We have been displaced two or three times now," said Ali Abdullah, another of the camp's residents. "We have not received blankets or mattresses, and the cold is going to kill us."

The Hayba family share a tent with six other families, with only two bales of straw for around 35 people to sleep on.

"We suffer from a lot of issues here," he told AFP. "We can't put up a curtain for privacy, and we don't even have the capability to set up a proper bathroom... Every three or four children share one blanket."

The Iran-backed Houthis began a big push to seize the strategic city of Marib in February and, after a lull in fighting, they renewed their campaign in September.

Despite aerial bombardment from the Saudi-led coalition, the Houthis claim to be tightening their grip around Marib, with fighting raging to the north, west and south of the city.

IOM spokeswoman Angela Wells said about 60 families were sheltering at Al-Sumya until this month, when an estimated 1,200 fleeing households arrived.

She said the IOM had started to offer services at the camp, including emergency relief items, trucking in water and building latrines and water tanks.

But concerns are growing as winter advances.

"With the winter months approaching, we worry that many do not have the clothing, blankets and other basic items they will need to stay safe and warm -- especially those living in makeshift shelters that are not equipped to protect people from the elements," Wells told AFP.

Marib city had between 20,000 and 30,000 inhabitants before the war but its population ballooned to hundreds of thousands as Yemenis fled frontline cities for its relative stability.

But with about 139 camps for the displaced in the province, according to the government, hosting around 2.2 million people, many displaced civilians are in the line of fire once again.

More than 45,000 people have been displaced by the fierce fighting in Marib province in the past two months, the IOM has said.

On Sunday, the UN children's agency said it was supporting more than 7,500 people in the camp by providing clean water, hygiene kits and portable toilets.

"There was no other shelter, so we hosted them in this camp with other families, and they've crammed on top of each other," he told AFP.

"Still, there is no proper shelter, no place to sleep, not enough blankets... they have nothing."