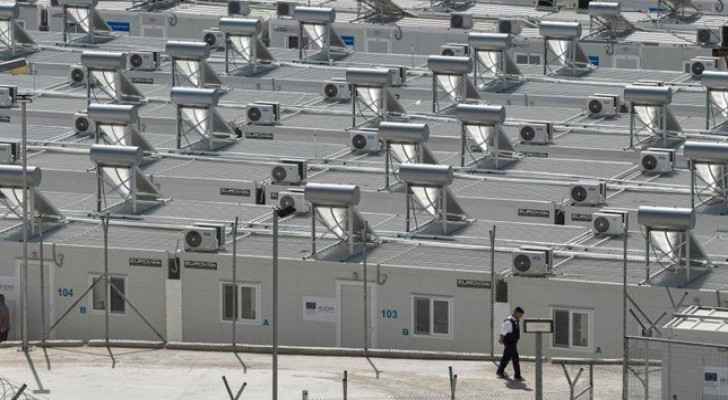 Greece Saturday opened two new closed camps for asylum seekers on the islands of Leros and Kos, a model camp that human rights advocates have criticized for the draconian restrictions.

"A new era has begun," said Immigration Minister Notis Mitaraki when announcing the opening of the two new camps.

The camps are security-monitored, barbed-wired, and equipped with cameras and magnetic gates. Asylum seekers are required to provide electronic cards and their fingerprints to enter, and are closed at night.

Asylum seekers can go out during the day but must return in the evening.

Greece has pledged to set up these new camps, funded by the European Union, to replace the squalid old camps where thousands of migrants are crammed into unsanitary conditions.

"We liberate our islands from the problem of immigrants and its consequences... Pictures of the years 2015-2019 have become a thing of the past," the minister added.

The first such safe camp opened in September on the island of Samos, after the dismantling of the old camp, which housed some 7,000 asylum seekers at the height of the migration crisis between 2015 and 2016.

Greece was the main gateway through which more than a million asylum seekers, mostly Syrians, Iraqis and Afghans, arrived in Europe in 2015.

The situation in Afghanistan has raised fears of a new wave of immigrants.

The new camps have amenities such as running water and toilets and better security conditions than the old camps.

Greece plans to open two more camps on the islands of Lesvos and Chios.

The European Union's contribution to the construction of these new facilities amounts to €276 million ($326 million).

NGOs have expressed concern about the isolation of asylum seekers and have called for their freedom of movement not to be restricted.

The United Nations estimates that there are about 96,000 refugees and asylum seekers on Greek territory.

Thousands demonstrate over price hikes in ....