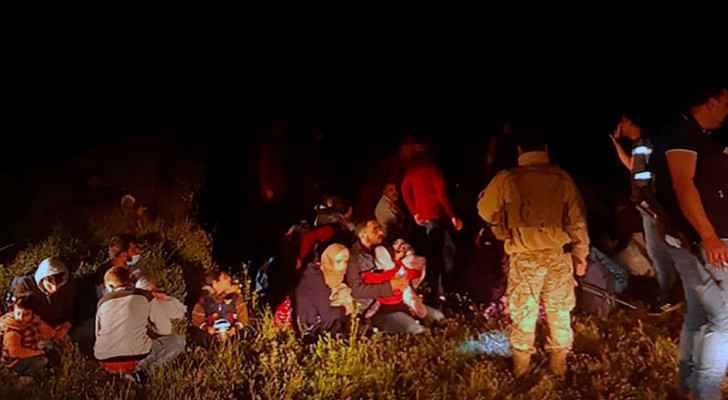 The Lebanese army thwarted an attempt to smuggle more than 90 people, including Lebanese, Syrian and Palestinian refugees, by sea, according to what was announced in a statement on Saturday, a day after the security forces announced that they had prevented a similar operation.

In light of the escalating economic collapse that has continued for more than two years in Lebanon, the number of migrants trying to flee by sea has doubled.

The army said in a statement that a naval patrol on Friday "chased a boat (...) in the waters opposite the town of Qalamoun (north) with 91 people (Lebanese, Syrians and Palestinians) on board, including children and women, while trying to smuggle them illegally."

The army patrol stopped the boat, "which almost sank due to bad weather, and rescued everyone on board, and they were taken to the shore."

The army’s statement comes a day after the Lebanese Internal Security Forces announced a raid on a resort on Thursday evening in the town of Qalamoun, and that they found 82 people, including women and children, who were preparing to go to Europe by sea, for a sum of five thousand dollars for each person.

The continuous collapse since the summer of 2019 has deepened the poverty level, bringing it to about eighty percent below the poverty line, while the rate is higher among Palestinian and Syrian refugees.

Lebanon estimates that there are 1.5 million Syrian refugees, in addition to about 180,000 Palestinian refugees, as well as tens of thousands of foreign migrant workers.

The specter of immigration returned to the fore recently, with the European Union accusing Belarus of organizing the flow of migrants to the border with Poland, where thousands, mostly from Middle Eastern countries, including Iraq and Syria, camp in the hope of entering the European Union.

On Thursday, Baghdad organized the first flight to bring back hundreds of Iraqis who failed to cross the border. After many travelers arrived in Belarus via Beirut, the Lebanese authorities announced on Wednesday that travelers to Belarus will be restricted to Belarusian citizens, all those who have residency in Belarus, and Lebanese who have an entry visa.