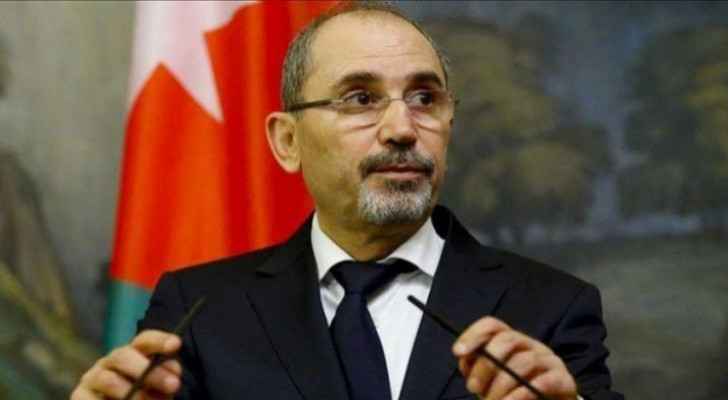 Deputy Prime Minister and Minister of Foreign Affairs and Expatriates, Ayman Safadi, said Saturday that the challenges facing the region require proactive Arab diplomacy that leads efforts to resolve regional crises, and takes the region towards a future of security, stability and achievement.

Safadi pointed to the need to activate the collective Arab role in efforts to resolve regional crises, in a speech he delivered as a keynote speaker in a dialogue session entitled "Diplomacy and Deterrence", which was held within the activities of the seventeenth session of the Regional Security Summit "Manama Dialogue."

Safadi stressed that peace and stability in the region cannot be achieved without solving the Palestinian issue on the basis of the two-state solution, which embodies the establishment of an independent, sovereign Palestinian state on the June 4, 1967 lines, with occupied Jerusalem as its capital, to live in peace and security alongside Israel in accordance with international law and resolutions of international legitimacy.

Al-Safadi said that the methodologies, which are based on the policy of coexistence with the fait accompli in the approaches to dealing with the crises of the region, are not acceptable because they will not produce the solutions that the region needs.

Al-Safadi added that it is not possible to jump over the Palestinian issue, and that there is no alternative to the two-state solution, warning that undermining the two-state solution will lead to the establishment of "the truth of the one state, and this will be an ugly truth that perpetuates racial discrimination" and that peace will not be achieved in light of it.

Al-Safadi also stressed that approaches based on coexistence with the fait accompli are unacceptable with regard to the Syrian crisis, which must end through a political solution in which the Arab countries have a major role to play.

Al-Safadi warned of the dangerous repercussions of the decline in international interest in the refugee issue and the decrease in support provided to them, stressing that the burden of asylum is an international responsibility that should not be borne by the host countries alone.

Safadi stressed the need to support Iraq and its stability, pointing to the importance of protecting the great victory that brotherly Iraq achieved over terrorism with great sacrifices.

He also stressed the importance of activating joint Arab action to confront common challenges in the region, by activating cooperation mechanisms in various fields.

In addition, Safadi met, on the sidelines of the Manama Dialogue Conference, the Prime Minister of the Kurdistan Regional Government of Iraq, Masrour Barzani, where they reviewed prospects for cooperation with the Kurdistan Region of Iraq. Al-Safadi affirmed the Kingdom's full support for Iraq and the brotherly Iraqi people in achieving their aspirations for a prosperous future.

Safadi also met with Iraqi Foreign Minister Dr. Fouad Hussein in a meeting during which Safadi affirmed the common interest in strengthening brotherly relations bilaterally, and at the level of the tripartite cooperation mechanism with the sisterly Arab Republic of Egypt. The two ministers stressed the importance of following up on cooperation and integration projects in various fields, by building on what was agreed upon in the previous summits of the leaders of the three countries.

The Iraqi Foreign Minister stressed the importance of building on what was agreed upon to enhance bilateral cooperation and integration between the two countries, and through the tripartite cooperation mechanism with the Arab Republic of Egypt.

Safadi and Singapore's Senior Minister of State for Defense Affairs Zaki Muhammad reviewed prospects for developing bilateral relations between the two friendly countries, especially in the defense and military fields, efforts to consolidate security and stability in the region, and the latest regional and international developments of common interest.

Al-Safadi and Minister Mohammed affirmed the continuation of cooperation and coordination, including efforts to combat terrorism, especially within the framework of the Aqaba meetings, which His Majesty King Abdullah II launched as a platform to devote a holistic approach to combating terrorism and its obscurantism.

It is noteworthy that the seventeenth session of the Manama Dialogue Summit, which will be held over three days, discusses the topic of "pluralism and the Middle East", and the most pressing security challenges facing the region.

The Kingdom of Bahrain has been hosting the Regional Security Summit (Manama Dialogue) since 2004, as it is being organized jointly by the Bahraini Ministry of Foreign Affairs and the International Institute for Strategic Studies. The Manama Dialogue, in this year's edition, is attended by a wide range of prime ministers, defense and foreign ministers, and national security advisors, in addition to a group of experts and opinion-holders. The conference also represents an important opportunity for holding bilateral and multilateral meetings between officials of the participating countries to advance and strengthen political initiatives and to discuss ways to deal with the challenges facing the region and the world.

One dead in three-storey building fire ....