Tens of thousands demonstrate against mandatory vaccines in Vienna 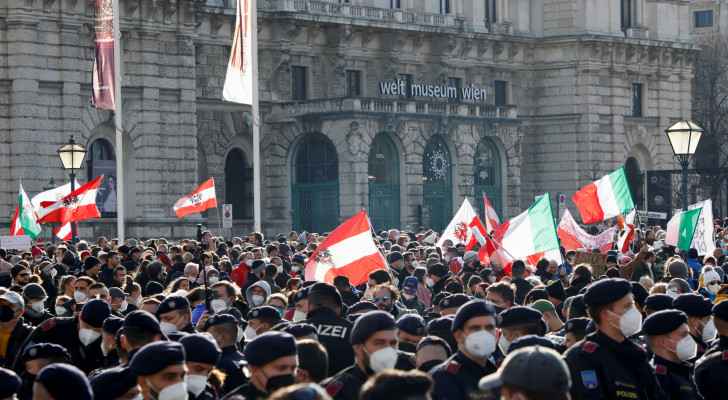 More than 35,000 demonstrators, according to the police, gathered Saturday in Vienna to protest against the mandatory quarantine and vaccination announced by the government the day before to combat the Covid-19 pandemic.

The crowd in the heart of the Austrian capital near the chancellery raised banners denouncing the "Corona dictatorship" or reading "No to the division of society."

The demonstration took place under strict supervision by the police, who arrested ten people.

"It is not normal to be deprived of our rights," said Katharina Gercher, who came from the province of Tyrol on the six-hour trip to the demonstration.

"The pressure at school is very strong," added the 42-year-old teacher, who kept her four children at home for months, referring to the coronavirus tests that are carried out every week in the classroom.

"The government wants to divide us and we must remain united," she said.

"It is an issue of freedom. The safety of our body is at stake, and this is not possible," said Martin, 34, a nurse.

The movement was organized at the invitation of the far-right party in the absence of its president, Herbert Kekel, who was infected with the virus.

A week after imposing strict measures against those who did not receive the vaccine, conservative Chancellor Alexander Schallenberg announced Friday that 8.9 million people will be quarantined until December 13.

From Monday, Austrians will only be able to leave their homes for shopping, sports or medical care.

Although initially reluctant, the government will also prepare a law to force vaccination on the adult population on February 1, 2022.

Penalties will be imposed on violators.

Schallenberg apologized to those who received the vaccine for having to take such "drastic" measures. He also attacked "the political forces in this country that strongly oppose vaccination," denouncing the "assault on our health system."

Austrian President Alexander Van der Bellen declared that "the coming weeks will require a tremendous effort on our part. We must do everything in our power to contain this wave and prevent the next outbreak."

In Europe, which has again become the epicenter of the epidemic, the number of infections in Austria has reached levels not recorded since the spring of 2020. More than 15,000 new infections are recorded daily, while the vaccination rate is about 66 percent of the population, which is slightly below the average in Europe.