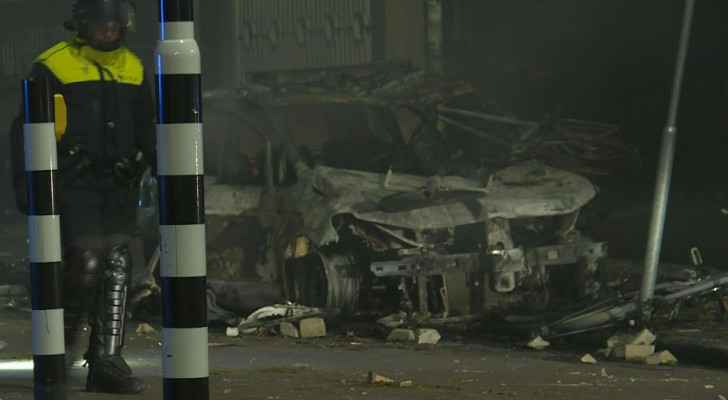 Police also fired water cannons to disperse demonstrators who lit fires and set off fireworks in one of Rotterdam's main shopping streets after a protest against the measures turned violent.

The Netherlands went back into Western Europe's first partial lockdown of the winter last Saturday with the government announcing at least three weeks of curbs on restaurants, shops and sporting events.

"A demonstration that started tonight at 8 pm on the Coolsingel has resulted in riots. Fires have been set in several places. Fireworks were set off and police fired several warning shots," Rotterdam police said in a statement.

"There are injuries related to the shots fired."

Police said that riot police later launched charges at the demonstrators, adding: "The water launcher has been deployed."

At least one police car was set on fire during the protest, a police spokesman confirmed to AFP. The spokesman would not confirm the number of people injured.

Several electric scooters and other items were also torched, with several hundred protesters involved in the riots, images on Dutch media and social media showed.

Local authorities issued an emergency order banning people from gathering in the area in a bid to prevent further violence.

Rotterdam's busy main railway station had also been closed as a result of the disturbances.

"This is a very serious situation which requires action with the highest priority," said the emergency order by the Rotterdam municipality.

"It is therefore necessary to issue this emergency order so as to maintain public order and to protect the safety of persons."

The Netherlands brought back restrictions after Covid cases soared to record levels, with more than 21,000 new infections reported on Friday.

Demonstrators clashed with police in The Hague after Prime Minister Mark Rutte announced the measures on November 12.

The restrictions came into force the following day, shuttering bars, restaurants, cafes and supermarkets at 8:00 pm daily, while non-essential shops must shut at 6:00 pm.

People are limited to having four visitors at home and have been advised to work at home unless absolutely necessary.

Public events have been scrapped while football matches must be played behind closed doors.

Schools however remain open, and people are allowed to leave their homes without restrictions.

The Dutch government has said it will review the situation on December 3.

It is considering excluding the unvaccinated from bars and restaurants, limiting admittance to people who have been vaccinated or who have recovered from the disease.

But there was significant opposition to the plan during a debate in parliament this week.

The Netherlands suffered its worst riots in four decades in January after a night-time Covid curfew, the country's first since World War II, came into force.

Dutch NGO hosts free online ‘IGNITE8’ event on how to ....