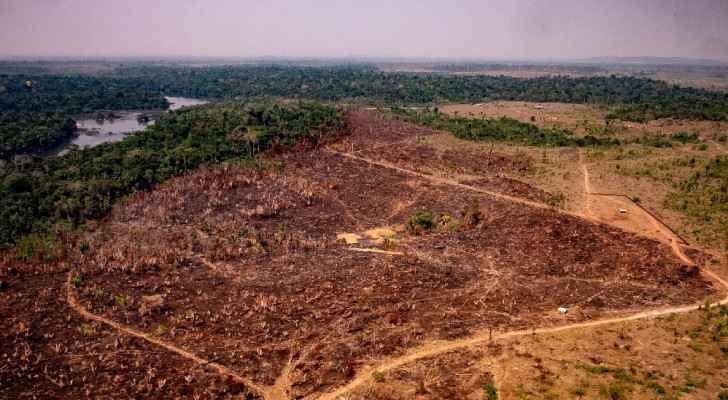 Deforestation in the Brazilian Amazon rose about 22 percent in one year, breaking a 15-year record and calling into question the declared will of Jair Bolsonaro's government to take more "drastic" measures.

Between August 2020 and July 2021, deforestation in the world's largest tropical forest spanned more than 13,235 square kilometres, the largest area since 2005-2006 (14,286 square kilometres), according to data from the National Institute of Research on Deforestation Monitoring System (PRODIS) Space in Brazil which was published Thursday.

It is the third year in a row that deforestation has increased since far-right President Jair Bolsonaro came to power, and he is under international criticism after he weakened biome control in the Amazon and encouraged mining activities in protected areas.

Brazilian Environment Minister Joaquim Leite said at a press conference in Brasilia shortly after the data was published, that these numbers represent "a challenge for us, and therefore we have to be more resolute in the face of environmental crimes."

But he added that these data "do not accurately reflect the reality of recent months."

However, according to data released by Brazil's National Institute for Space Research last week, deforestation in the Brazilian Amazon reached 877 square kilometers in October, a record number for this month of the year in five years.

The Brazilian government says it has stepped up its efforts to combat deforestation by increasing the number of soldiers three months ago in the worst-affected areas.

Deforestation is attributed in particular to illegal mining and livestock-raising activities.

"To those who insist on committing these environmental crimes, we warn them that the Brazilian state will use all its power in the Amazon region," Justice and Public Safety Minister Anderson Torres said.

Upon taking office in 2019, thanks in part to the support of powerful agribusiness groups, Bolsonaro announced that he wanted to make protected lands and indigenous reserves available for agriculture and mining.

Marcio Astrini, executive director of the Climate Observatory, which includes major environmental NGOs and institutes active in Brazil, including the World Wide Fund for Nature and Greenpeace, said, "This result is the result of persistent, planned and continuous efforts to destroy environmental protection policies" under the Bolsonaro government.

Also, the observatory accused the government of refraining from publishing the data until after the Conference of Parties (COP26), as the document published by the institute on Thursday and related to the Ministry of Science, Technology and Innovation, is dated October 27, 2021.

"The government had deforestation data at the time of the Glasgow climate conference and deliberately kept it secret."

But the Minister of Environment responded to that by saying, "The information I have is that it was published today."

At the Climate Conference in Glasgow, Brazil pledged to advance by two years the deadline to eliminate deforestation of its land, which includes 60 percent of the Amazon region, from 2030 to 2028.

"We will certainly be more resolute to reverse the rising trend of deforestation and achieve the goal announced at the conference," Leyte said.

How much has Jeff Bezos earned since stepping down from ....

How much has Jeff Bezos earned since ....