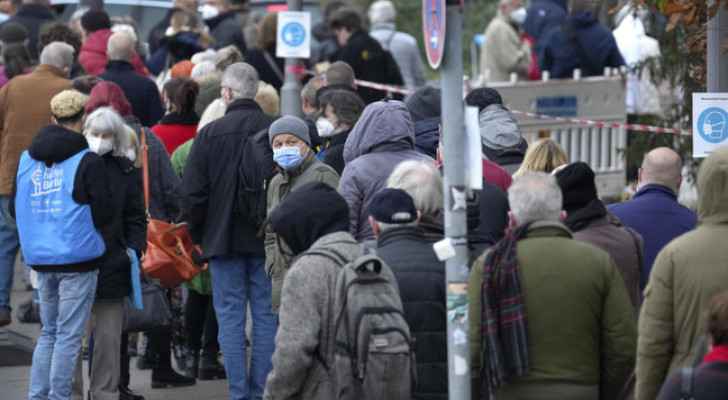 The head of Germany's disease control agency on Friday cast doubt on whether new government restrictions to fight coronavirus would be enough to break a vicious fourth wave of the pandemic.

The director of the Robert Koch Institute, Lothar Wieler, told reporters that with record-breaking infection levels, the nationwide curbs on the unvaccinated were insufficient.

As cases have topped 300 per 100,000 people, the rules for public spaces "are no longer enough in the current situation," he said, calling it an "absolute emergency."

Wieler called for big events to be cancelled, clubs and bars to be shuttered and private contacts limited to stop the spread of the virus.

Germans should "stay home when they can," he said.

Chancellor Angela Merkel and the leaders of Germany's 16 states agreed Thursday to shut the unvaccinated out of restaurants, sporting events and cultural shows after new cases soared to an all-time daily high of more than 65,000.

To protect the most vulnerable, they also agreed to introduce compulsory vaccination for healthcare workers and employees in elderly homes.

After a strong push in the spring, Germany's inoculation rate stagnated over the summer to hover at just under 70 percent.

The upper house of parliament on Friday unanimously passed a new law providing the legal framework to deploy the new measures, following a bitter debate between members of the outgoing government and the likely next ruling coalition.

Wieler had earlier this week warned of a "very bad Christmas" if Germany did not take drastic measures to fight infections.

"We can only turn this tanker around together," he said Friday.

Health Minister Jens Spahn told the same news conference that the government was stepping up supplies of vaccines, with five million jabs ordered for doctor's offices next week to meet demand for booster doses.

Asked whether Germany would consider a hard lockdown as announced in Austria Friday, Spahn said it was not on the table yet "but we shouldn't rule anything out."

"We have obviously not reached the peak" number of positive cases or hospitalisations, he said.

Spahn said that as intensive care units fill up with coronavirus patients, most of them unvaccinated, Germany must prepare to transfer the gravely ill to facilities that still have available beds, "including abroad."