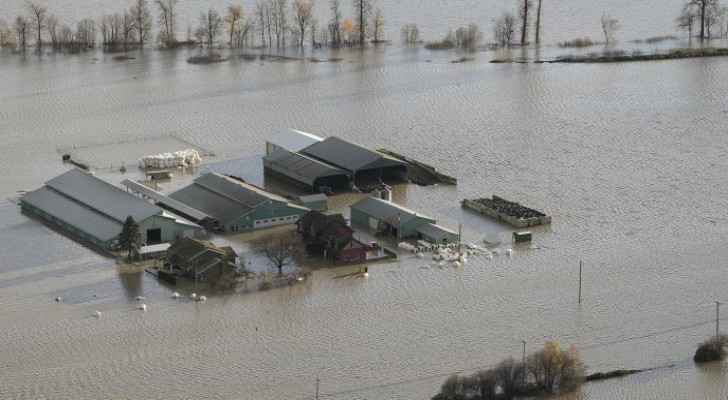 Canada is sending the military to help evacuate and support communities hit by "extreme flooding" after record rainfall on the Pacific coast, the government said Wednesday.

Downpours in British Columbia this week trapped motorists in mudslides that left at least one dead and two missing, forced thousands to flee their homes, and cut off Vancouver and its port.

"In response to extreme flooding across Southern BC, we have approved the deployment of @CanadianForces air support personnel to assist with evacuation efforts, support supply chain routes, and protect residents against floods and landslides," Public Safety Minister Bill Blair said on Twitter.

A spokesperson told AFP the military was still sorting out the details of the deployment.

In Washington, ahead of a meeting with his US and Mexican counterparts, Canadian Prime Minister Justin Trudeau said the rains caused "historical and terrible flooding that has disrupted the lives and taken lives of people across B.C."

He pledged federal support, saying: "We'll be there for the cleanup and the rebuilding after the impacts of these extreme weather events."

Mike Farnworth, British Columbia's public safety minister told a briefing the previous evening that he had "no doubt these are climate-related events."

The torrential rains had let up by Tuesday afternoon. An estimated 300 motorists trapped on highways by mudslides have been airlifted to safety and a few of a dozen evacuation orders have been rescinded.

But Henry Braun, the mayor of hard-hit Abbotsford, just east of Vancouver, told a briefing Wednesday morning: "We're not out of this yet."

"If we have another weather event, like we just went through, we are in deep doo doo," he said.

Meanwhile, searches continue for more possible victims, after police announced on Tuesday the recovery of a woman's body from a mudslide near Lillooet, 250 kilometers (155 miles) northeast of Vancouver.

Motorist Kathie Rennie told public broadcaster CBC she witnessed "the whole side of the mountain coming down and taking out these cars... everything just being swept away. Just complete panic."

Television images showed several inland towns covered in mud and partially inundated, with residents now scrambling for food, heat and water -- as the first snow flurries of the season started to fall.

On the outskirts of Vancouver, a large fire broke out at an RV dealership in the flooded Sumas Prairie, and farmers scrambled to pull livestock from the water -- including one person who was seen towing a cow behind a jet ski through a meter (three feet) of water to higher ground. The flames pose a risk to nearby hydro transmission lines, according to officials.

Braun said almost 200 people had been airlifted overnight to safety, after the city of 162,000 warned a pump station was at risk of being overwhelmed due to the Nooksack River carrying a surge of water north from the United States.
Most of the area is farmland created by draining Sumas Lake in the 1920s.

The pump station, Braun said, "was never intended or designed to take on water from another country."

Key highways remain closed. As a result, motorists wanting to travel to or from Vancouver have to go south to the United States and back up into Canada.

Landslides also cut off rail traffic to and from Vancouver -- one of Canada's busiest freight sea ports.

Across the province, people are now reportedly finding grocery store shelves empty, as supply chains have been cut off.

Environment Canada said up to 250 millimeters (almost 10 inches) of rain -- what the region normally gets in a month -- fell Sunday and Monday in and around Vancouver, which was also hit last week by a rare tornado.

Meteorologists blamed a rare "atmospheric river," or narrow strip of moisture carried from tropical regions toward the poles, for the deluge.

The extreme weather comes after British Columbia suffered record-high temperatures over the summer that killed more than 500 people, as well as wildfires that destroyed a town.

One dead in mudslides that cut off Vancouver from rest of ....

One dead in mudslides that cut off Vancouver ....

One dead in mudslides that cut off Vancouver ....

One dead in mudslides that cut off ....

US to open land, air borders to vaccinated travelers