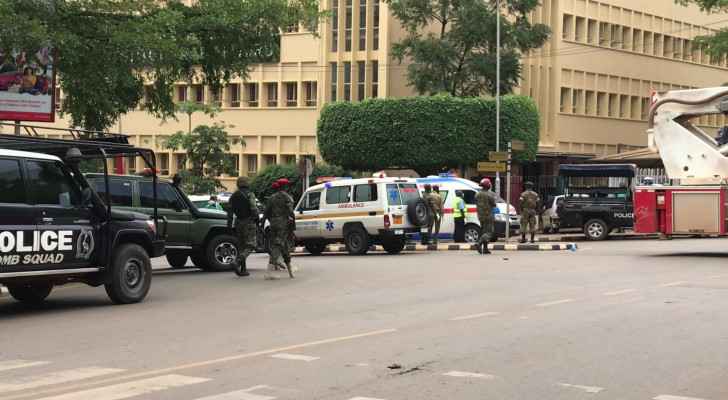 Two explosions hit Uganda's capital Kampala on Tuesday, injuring a number of people in what police termed an attack on the city, the latest in a string of blasts targeting the country.

The explosions occurred in the central business district of Kampala near the central police station and the entrance to parliament, police said.

"What we can say (is) this was an attack but who is responsible is a matter that is under investigation," Uganda's Assistant Inspector General of police Edward Ochom told AFP.

"Following the unfortunate and cowardly act of terrorism, our health workers are working around the clock to save lives of those injured," he said.

The explosion near the police station shattered windows while the one near the entrance to parliament saw cars parked nearby burst into flames, Ochom said.

"We have dispatched a team" to the area, Uganda Red Cross spokeswoman Irene Nakasiita told AFP.

The twin attacks follow two blasts last month -- a bus explosion near Kampala that wounded many people and a bombing at a roadside eatery in the capital that killed one woman.

Kyle Spencer, the executive director of Uganda's Internet Exchange Point, told AFP that Tuesday's explosions had sparked panic among many people nearby.

"The road to parliament is closed off, there are people just crying, everyone else is just trying to get away from these areas," he said.

"Everybody is evacuating office buildings and the buildings are locking up and not letting anybody inside."

Brother of two men killed in Irbid speaks to Roya

Brother of two men killed in Irbid speaks to ....

Brother of two men killed in Irbid speaks to ....