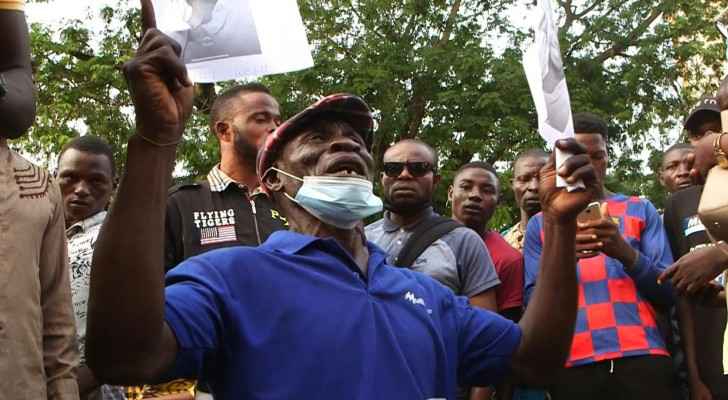 Nigerian rescue crews dug for more survivors in the rubble of a collapsed Lagos high-rise building on Tuesday, a day after the disaster killed at least 20 people and left many more trapped inside.

The 21-storey building was still under construction when it fell abruptly into a pile of concrete slabs on Monday in the wealthy Ikoyi district of Nigeria's commercial capital.

Rescuers said Tuesday they had recovered 20 bodies so far and managed to pull nine survivors from the wreckage, but construction workers fear dozens of their colleagues are trapped inside.

"Five more bodies have been recovered, taking the death toll to 20. But the number of those pulled out alive still stands at nine," Ibrahim Farinloye of the National Emergency Management Agency told AFP.

Farinloye earlier said rescue workers had been communicating with other survivors still trapped under the destroyed building.

Two other smaller buildings in Lagos also collapsed on Tuesday following heavy rains in the densely populated city a day earlier, though no one was killed, he said.

Building collapses are tragically common in Lagos and across Africa's most populous nation where substandard materials, negligence and a lack of enforcement of construction standards are major problems.

Nigerian President Muhammadu Buhari in a statement late Monday had urged authorities to step upefforts in rescue operations for the victims of the Ikoyi incident.

But relatives, many of whom had not left the site since the collapse, were angry and desperate for news of those missing inside the Gerrard Road building.

Sitting on the pavement near the crushed remains of the building, brothers Fawas Sanni, 21, and Afolabi Sanni, 17, were shell-shocked as they waited for news of their sibling.

"Our sister is inside," said Fawas, a tear rolling down his cheek.

Their 25-year-old-sister Zainab was posted on September 6 to the construction site by the National Youth Service Corps, they said.

"I was the last one who spoke to her before she went to work yesterday morning," said the older brother, covering his head with his hands.

Enahoro Tony, a volunteer, was angry at the handling of the rescue operation.

"I retrieved three bodies, then we were chased away by the army," he said.

Lagos State Governor Babajide Sanwo-Olu said he had suspended the head of the state building regulatory agency and ordered an independent panel to investigate the accident.

"We wish to state there will be no cover-up in the search for the truth in this incident," he said in a statement.

Lagos state police say it is too early to determine why the Ikoyi building collapsed, but Lagos emergency management agency manager Femi Oke-Osanyintolu said infractions had been committed in its construction.

"We are going to get to the roots of the matter to prevent a recurrence," he told AFP.

Two excavators were digging in the pile of concrete on Tuesday, as the crowd outside the building grew.

Across the street from the site, Moses Oladipo, 65, was waiting for news from his 50-year-old son, who has three children.

"He just came here to visit his friend, before his flight back to the US where he lives," said the father, crouching on the ground close to the entrance.

"I still have hope."

By evening, more than a hundred people were still gathered outside the iron gates of the collapsed building.

Many were mothers, fathers, siblings and friends of people stuck in the rubble, sitting on the pavement under the crushing heat.

In one of Nigeria's worst building disasters, more than 100 people, mostly South Africans, died when a church guesthouse crumbled in Lagos in 2014.

An inquiry found the building had been built illegally and had structural flaws.

Two years later, at least 60 people were killed when a roof fell in on a church in Uyo, the capital of Akwa Ibom state, in the east of the country.