Comic Weeks Exhibition returns for its second edition on Nov. 2

Comic Weeks Exhibition returns for its second edition on Nov. 2 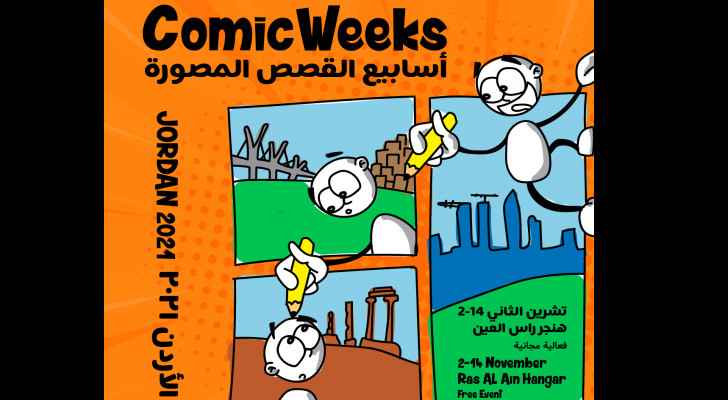 The European Union in Jordan and the European Union National Institutes for Culture (EUNIC), in cooperation with the Embassies of Belgium and Spain and the Instituto Cervantes will celebrate comic art by organizing the second edition of Comic Weeks under the theme of “Women in Comics.” The EU-funded event will be held between Nov. 2 and 14 at Ras Al Ain Hangar, in partnership with the Greater Amman Municipality (GAM).

Under this year’s theme, the Exhibition aims to celebrate the history of the ninth art, its role in society, its universal appeal, and to discuss how it is portrayed as a popular mean of expression by displaying comic illustrations that showcase European art and culture to the Jordanian community. The illustrations were created by some of Europe’s most renowned comic artists to encourage cultural dialogue and to highlight cultural cooperation between Europe and Jordan.

“We are very happy to be able to celebrate European culture in the form of comics, as Europe has a long history in comics and cartoon illustrations. Comics can serve as a universal language that creates bridges between Europe and Jordan and bring their cultures closer. Comics have been reflecting as well as influencing our cultures. This particular exhibition, focusing on Women in Comics, shows how comics are developed by women artists or how comics have developed, including the way women are written, drawn, or treated as characters,” commented the EU Ambassador to Jordan, H.E Maria Hadjitheodosiou on the upcoming event.

The program will also feature two workshops that are hosted by the participating Member States, where the Embassy of Spain and the Instituto Cervantes have invited the critically acclaimed and renowned Spanish illustrators and writers Paco Roca and Laura Pérez Granel to conduct a workshop during the first week of the exhibition that will equip experienced artists with new skills and strategies to enable them to revolutionize the industry in the Kingdom. The Embassy of Belgium has also invited Juliette Boutant, one of Belgium’s most prominent comic artists, to conduct a workshop during the second week of the exhibition for school students to ignite the participants’ imaginations and foster the next generation of visual storytellers.