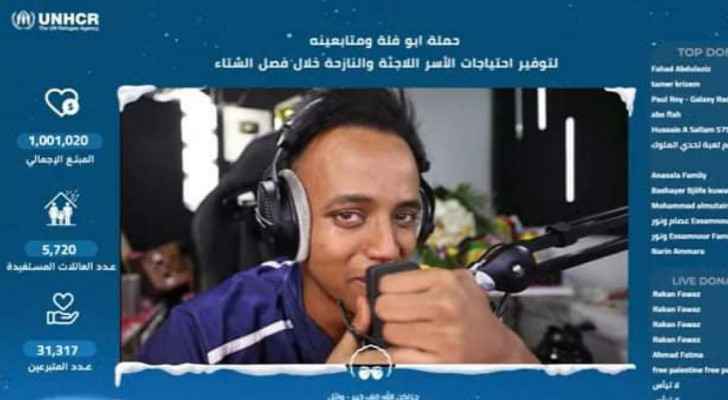 Saturday evening, a Kuwaiti YouTuber and well-known content creator, Abu Fella, managed to raise USD one million during a campaign he launched to help refugees before the winter season.

The campaign will help around 6,000 refugee and displaced families.

Millions of people around the world watched the live broadcast, while the number of donors reached more than 27,200, as of 11:00pm Saturday.

Abu Fella launched a “Warm Their Hearts” campaign in cooperation and partnership with the United Nations High Commissioner for Refugees (UNHCR) to raise USD one million to help refugees before the onset of winter.

“Believing in the societal role, Abu Fella, one of the most popular video game players in the Arab world and owner of the largest growing YouTube channel in the world, decided to dedicate his efforts to supporting humanitarian causes,” the commission said in a statement posted on its official website.

The UNHCR added that, in recognition of his channel's crossing of 20 million subscribers, "he decided to launch a joint campaign with the UNHCR to provide the needs of thousands of refugees and displaced families during the winter season."

The UNHCR explained that the launch of the campaign comes "in light of the continuing suffering of refugees and displaced persons in the Middle East and North Africa", where "the needs of families are increasing, especially in light of the high rates of poverty among refugees in the host countries, forcing many families to take harsh decisions, to provide winter necessities, such as fuel, heating equipment, and medicine.”