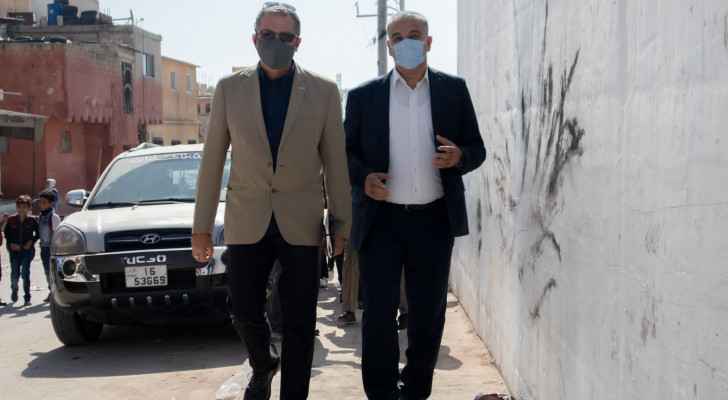 The delegation was accompanied by the Director of UNRWA Affairs in Jordan, Ms. Marta Lorenzo and UNRWA staff.

While at the Camp Improvement Committee Office, H.E. Mr. Vincent was briefed on the situation of Palestine refugees in Jordan, specifically about the vulnerabilities faced by Ex-Gazan and Palestine refugees from Syria and recent developments on UNRWA operations across the region.

The meeting was followed by a visit to the UNRWA Jerash Health Centre. The delegation had the opportunity to observe firsthand the UNRWA response to COVID-19 and how the Agency's health program guarantees service continuity and abides by protective measures while providing quality health care safely, avoiding gatherings and overcrowding. This was done by investing in digitalization through establishing smartphone applications and telemedicine services.

During a visit to the UNRWA Jerash Camp Girls' School, the delegation was briefed about the education program and the resuming of in-person education after months of online education. It highlighted the challenges faced by the agency during the closure of the schools. The delegation was also informed about the safety precautions being held at UNRWA schools to preserve students' health and ensure that schools remain open.

Ambassador O’Neill stated “Ireland is a steadfast supporter of the Palestinian people – and this is reflected in the priority we afford to our partnership with the United Nations Relief and Works Agency. It was a privilege to visit their programs in Jerash to-day and to witness the extent UNRWA is supporting and transforming the lives of refugees from Palestine who are living in Jordan. I’m delighted that earlier this year Mr Simon Coveney, Ireland’s Minister for Foreign Affairs signed a three-year agreement with UNRWA committing financial support of EUR six million per year for the next three years for their important work.”

"Ireland sets a great example in terms of their support for Palestine refugees and has stood very firmly with the Agency during very challenging times. Yesterday's visit to Jerash camp was a great opportunity to see firsthand services provided by UNRWA to refugees and meet our students in their classes happily welcoming face-to-face education," said the Director of UNRWA Affairs Ms. Marta Lorenzo.

The visit was concluded by visiting one of Palestine refugee families residing in Jerash camp. The delegation listened to their living situation and the negative impact of the COVID-19 pandemic on their socioeconomic status and how UNRWA supported them.

Ireland is amongst the agency's most reliable and committed partners, supporting the agency for decades financially and politically. In March 2021, UNRWA and Ireland concluded a multi-year agreement from 2021-2023, providing a baseline contribution of EUR six million annually over three years.