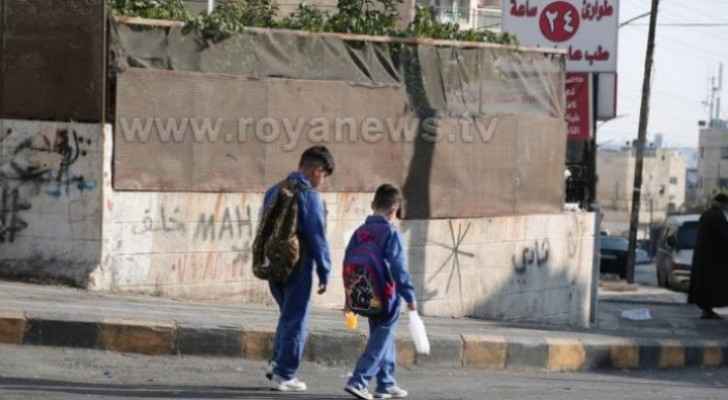 Sunday, the “National Back to School campaign,” which is a plan towards a safe return to schools, called on government officials in the Ministry of Health to minimize press statements regarding the epidemiological situation in schools.

In a statement, which Roya received a copy of, the campaign was surprised by some news headlines that talked about the statements of the Minister of Health, saying that some of them are ‘far from logic.’

Regarding the rate of coronavirus infections among children, which was mentioned to be 30 percent, the campaign considered that the percentage is wrong, especially that children make up 40 percent of Jordan's population, noting that this is ‘illogical.’

The campaign indicated that the increase in the number of COVID-19 cases is normal and expected in light of the increase in the number of the conducted PCR tests, pointing to the statements of the Minister of Education regarding conducting more than 2,000 daily random PCR tests among school students. Previously, random PCR tests were not conducted for this demographic during the distance learning period.

The campaign also expressed its surprise by the insistence on focusing on the number of COVID-19 infections among the children instead of the rate of their admission to hospitals.

The campaign lastly emphasized the importance to continue with in-person education for all educational levels.

Friday, statements made by the Minister of Health, Firas Al-Hawari, sparked fear among Jordanians of the possible return to distance learning once again.

Since the students returned to their classrooms in September, Jordanians have been constantly wondering if schools will close their doors and students will return to distance education, while the government continues to emphasize that there will be no return to closures, especially in schools.

Al-Hawari had attributed the rise in coronavirus infections in Jordan to students, saying that the infection rate before opening all sectors was 17 percent, and it reached 35 to 40 percent among the category of school students, while no significant change in infection rate occurred among other segments of society.

A user on social media wrote that the Minister’s statement “at the very least requires the immediate dismissal of the Minister of Health.”

Another user replied saying “No, absolutely not.. Dr. Hawwari is a man of knowledge and class. He said that the most important thing is for the curve to remain flat. He did not defend festivals, he supported his statements with numbers and statistics and explained what they mean,” he continued, “we have to trust our institutions. Do you want the Minister to resign just because you don’t like what he said?!”

The Minister of Health noted that school students face less danger when infected, and do not require hospitalization, as only four people were admitted to the hospital.

'No return to online learning in second semester': ....

'There is no return to online education': Hawari

'There is no return to online education': Hawari