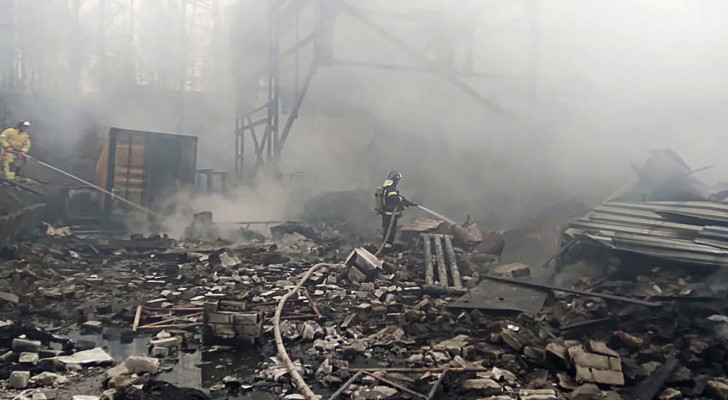 Seven people were killed and nine others were missing in a fire at a factory for the production of explosives for civilian use in the Ryazan region in central Russia, the Russian Ministry of Emergency Situations announced Friday.

"A fire broke out after a technical operation," the ministry said in a statement, adding that "seven people were killed, one was taken to hospital, and the fate of nine others is still unknown."

The accident took place at the "Elastic" factory for the manufacture of industrial explosives intended for civilian use, according to the same source.

More than 170 paramedics were sent to the scene to control the fire.

"There is nothing that poses a threat to the residents" of the neighboring towns, the ministry added.

The fire was caused by a "violation of technological processes and safety standards," Interfax news agency quoted a security source as saying.

The Russian government considers this factory a "strategic company" and, according to the company's website, it belongs to the state group "Rostec", which includes companies that supply advanced industrial products to the civil and military sectors.

Accidental and fatal explosions and fires are common in Russia due to dilapidated infrastructure, much of which dates back to the Soviet era, or non-compliance with safety standards.

In January 2020, 11 and then four people died, respectively, in separate fires in Tomsk and Moscow that broke out in migrant housing.

The most serious fire in recent years erupted in 2018, when 64 people died after fire destroyed a shopping center while alarm systems and emergency exits were out of order.

China says Omicron will 'lead to challenges' for Winter ....

China says Omicron will 'lead to challenges' for ....

China says Omicron will 'lead to ....