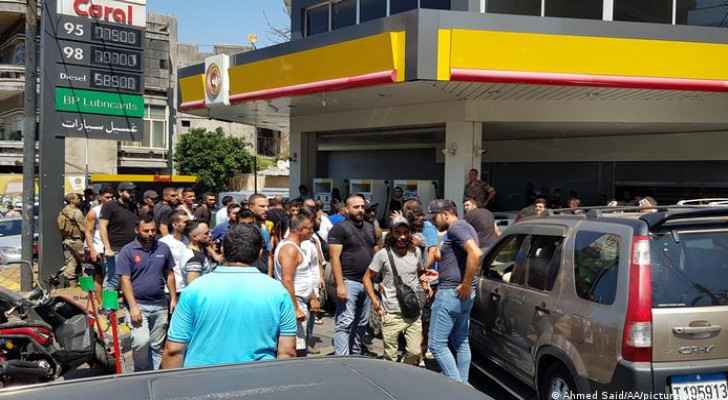 Wednesday, the Lebanese Ministry of Energy set for the first time the selling price of gasoline based on the exchange rate on the black market, which practically means lifting subsidies for fuel, in a step that exacerbates the suffering of the Lebanese.

The price of twenty liters of 95-octane gasoline now stands at about 302,700 pounds (about $15 according to the black market).

Since June, the price of 20 liters of gasoline has increased by 550 percent.

A senior source in the Ministry of Energy told AFP, "The price of gasoline was calculated this time according to the exchange rate of 20,000 to the dollar, at the request of the Banque du Liban."

He explained that the rise in the price of gasoline was accompanied by a rise in oil prices globally.

During the past weeks, the subsidies for diesel and household gas have been lifted, and the facilities are now selling them in US dollars, without an official announcement of lifting the subsidy.

The representative of fuel distributors, Fadi Abu Shakra, told AFP, "What happened today is a complete lifting of gasoline subsidies... and the approved increase will be reflected in an increase in the prices of all services, especially transportation."

An activist wrote on Twitter, "You pay your salary for petrol, only to wake up and find yourself in need of debt...to fill your car."

Another sarcastic activist tweeted, "My salary is equivalent to four cans of petrol."

80 percent of Lebanese now live below the poverty line.

For months, the authorities have been working to gradually lift subsidies on the import of major commodities, most notably fuels, with the depletion of the Banque du Liban’s dollar reserves.

Local media quoted a member of the Syndicate of Gas Station Owners, George Al-Barraks, as saying that the consumption of gasoline decreased after the price hike during the last period.

The fuel crisis is reflected in various sectors, including hospitals, bakeries, communications and foodstuffs.

Over the past few weeks, the queues of cars waiting for long hours in front of petrol stations have decreased.

With the delay of the Banque du Liban in opening credits to import the fuel necessary to operate the production plants, the ability of the Electricité du Liban to provide service to all regions declined during the past months, which led to an increase in rationing hours to exceed 22 hours per day. Private generators are no longer able to provide the diesel needed to cover the hours of power outages, forcing them to rationing and raising their tariffs significantly.