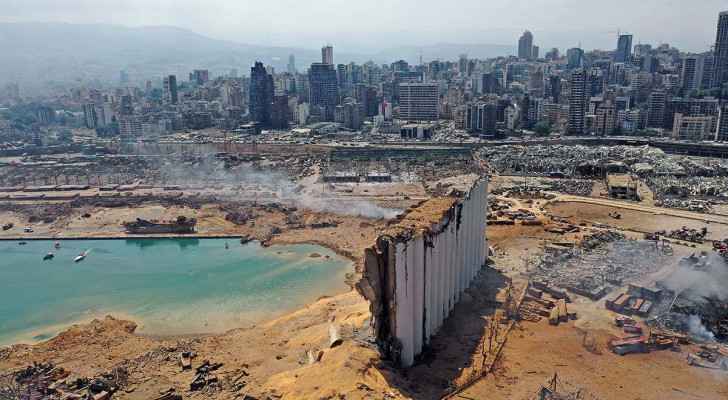 Dozens of Hezbollah and Amal supporters demonstrated in front of the Palace of Justice in Beirut on Thursday, rejecting the performance of the judicial investigator in the Beirut port explosion, who has requested to prosecute political and security officials.

Dozens demonstrated Thursday in front of the Palace of Justice, according to AFP correspondents, amid hearing heavy gunfire in a nearby area.

The ministers of Hezbollah, the most prominent political and military force, and its ally, the Amal movement, lead the position that rejects Bitar's work, accusing him of "discrimination and politicization."

Many fear that pressure will lead to the ouster of Bitar, similar to his predecessor Fadi Sawan, who was removed in February after accusing political officials.

Since Bitar's claim against former Prime Minister Hassan Diab and his request to prosecute deputies, former ministers and security officials, four concerned ministers have submitted complaints before multiple courts demanding that the case be transferred from Bitar, forcing him to suspend the investigation into the case twice so far.

On Tuesday, Bitar suspended the investigation pending a ruling on a lawsuit filed before the Civil Court of Cassation by the two current MPs, former Finance Minister Ali Hassan Khalil and former Minister of Works Ghazi Zuaiter, who belong to the Amal Movement bloc led by Parliament Speaker Nabih Berri.

A judicial source told Agence France-Presse that the Civil Court of Cassation rejected the case on the grounds that it was not within its jurisdiction, because Bitar "is not a judge of the Court of Cassation."

This is the second time that the judiciary has rejected a similar case against Bitar because the court has no jurisdiction to consider it.

The government was scheduled to hold a session on Wednesday afternoon to discuss the investigation track, a day after the cabinet witnessed tension after the ministers of Hezbollah and Amal demanded a change of the judicial investigator. However, Prime Minister Najib Mikati decided to postpone Wednesday's meeting to a date to be determined later, pending a solution.

On August 4, 2020, a huge explosion killed at least 214 people and injured more than 6,500 others, in addition to causing extensive destruction in the capital. The authorities attributed the explosion to the storage of large quantities of ammonium nitrate without protective measures. It turns out that officials at several levels were aware of the dangers of storing the substance.

The dispute arose within the government after Bitar issued an arrest warrant in absentia against Khalil on Tuesday for his failure to attend his interrogation session.

The families of the victims constantly demonstrated in support of Bitar and denounced the defendants' refusal to appear before him for interrogation, while human rights organizations denounced the attempt by political leaders to obstruct the investigations, and demanded the establishment of an independent and impartial international investigation mission.