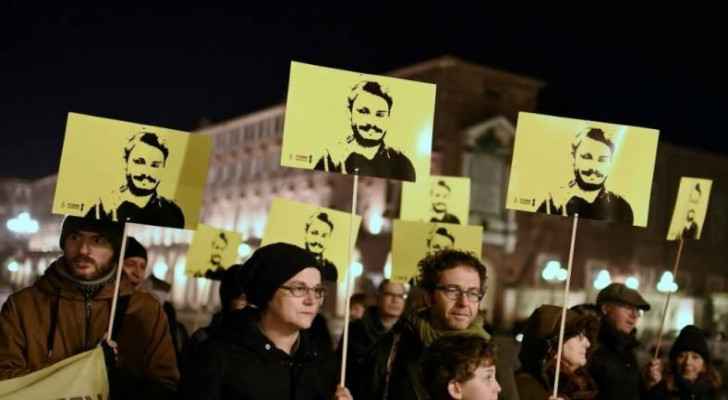 Four Egyptian police officers are being tried in absentia in Italy on Thursday on suspicion of the brutal murder in Cairo of Italian student Giulio Regeni five years ago, in a case that has strained relations between Cairo and Rome.

The officers are accused of kidnapping, conspiracy to murder and causing grievous bodily harm to the Italian student.

Regeni, 28, was kidnapped by unknown persons in January 2016 in Egypt, where he was researching for a PhD at Cambridge University. His body, which bore signs of severe torture, was found dumped in a suburb of Cairo.

Italian Foreign Minister Luigi Di Maio welcomed the first hearing in Rome, saying it was an "unexpected outcome in the weeks after the discovery of Giulio's body" when the case seemed unsolvable.

But the trial may collapse before it even begins.

The court will decide whether the four suspects are aware of the judicial procedures taken against them, as required by law, while Egypt has refused to provide contact details.

At a preliminary hearing in May, a judge considered media coverage to make the four officers aware of their investigation. This decision may be upheld or reversed by the court on Thursday.

The four officers are, as their names appear in the court documents, Major General Tariq Saber, two colonels, Asser Kamel Muhammad Ibrahim, Hussam Helmy, and Major Ibrahim Abdel-Al Sharif, who is accused of carrying out the killing.

Italian investigators believe Regeni was kidnapped and murdered on the misconception that he was a foreign spy. They had accused the Egyptian intelligence services of "torturing him for days by inflicting burns on his body, kicking and punching him, and using a white weapon and batons" before killing him.

Prosecutor Michele Prestipino told a parliamentary committee last December that there were "significant elements of evidence" implicating Egyptian officers in the murder, an accusation that Egypt rejected.

According to her team's investigation, Sharif asked informants to track Regeni, then arrest him and cause him "extreme physical suffering." Regeni had broken teeth, hands and feet, and died of suffocation.

Italian media reported that Regeni's legal team had requested that all Italian prime ministers and foreign ministers since 2016 be called as witnesses, along with the country's intelligence services.

But the defense attorney appointed by the court, Tranquelino Sarno, told AFP that the "continuity or collapse" of the trial was related to the ability of key eyewitnesses for the prosecution to come to Rome to testify in person.

Regeni's body was found nine days after his disappearance. His mother later said the body was so disfigured that she could only recognize her son by "the tip of his nose."

Claudio Francavilla of Human Rights Watch told reporters in Rome on Wednesday that the trial would be closely watched because it was "a symbol of hope for Egyptians."

At the end of last January, Italian President Sergio Mattarella expressed his hope for the "full" cooperation of the Egyptian authorities in this case, after the Public Prosecution Office in Rome formally requested the start of the trial of the four officers.

"We are waiting for a full and appropriate response from the Egyptian authorities, in accordance with what our diplomats have been asking for in this regard," Mattarella wrote.

In December, the Egyptian Public Prosecution dropped the charges against the police officers, and found that there was no reason to file a criminal case because the perpetrator was not known.

The case caused strained relations between Cairo and Rome, and Italy accused the Egyptian authorities of not cooperating, and even directing Italian investigators towards false assumptions.

However, last June, Egypt purchased two frigates from Italy worth 1.2 billion euros, in a sign that momentum is beginning to return to bilateral relations.

Refugees who returned to Syria were subjected to ....

Refugees who returned to Syria were subjected to ....

Refugees who returned to Syria were subjected ....

Refugees who returned to Syria were ....