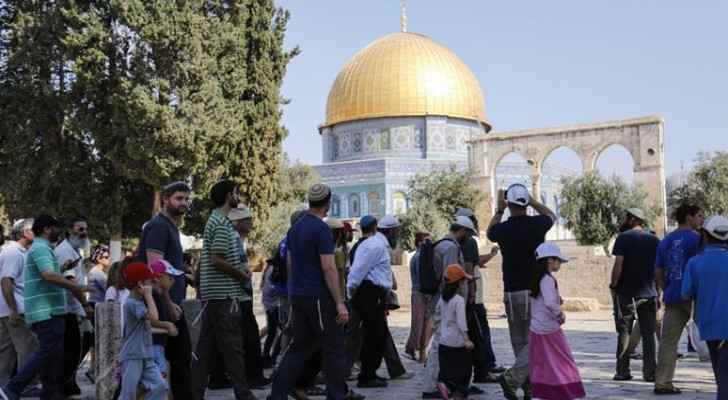 Tuesday, a number of Jewish extremist settlers stormed the courtyards of Al Aqsa Mosque in occupied East Jerusalem to perform silent prayer, which has been banned by Israeli Occupation courts.

The settlers stormed the Mughrabi Gate under heavy protection of Israeli Occupation police, according to Petra News Agency.

The settlers toured the courtyards and provocatively performed “silent prayers” in the eastern part of the compound before they left from Al-Silsila Gate, while Muslim worshipers and the mosque’s guards protested their presence with chants, according to eyewitnesses.

Notably, on Friday, an Israeli Occupation court decided not to allow the settlers to perform “silent prayer” in Al Aqsa Mosque in Occupied Jerusalem.

This came after the occupation police filed an appeal against the decision of the Jerusalem Magistrates' Court, which, on Wednesday, allowed the Israeli Occupiers to perform silent prayers in the courtyards of Al Aqsa and decided that their prayers cannot be deemed a “criminal act.”

The Minister of Internal Security in the Israeli Occupation had said that changing the status quo at Al Aqsa would pose a threat to public safety and would lead to an explosion of the situation.

King says Palestinian cause at core of Jordan’s diplomatic ....

King says Palestinian cause at core of ....