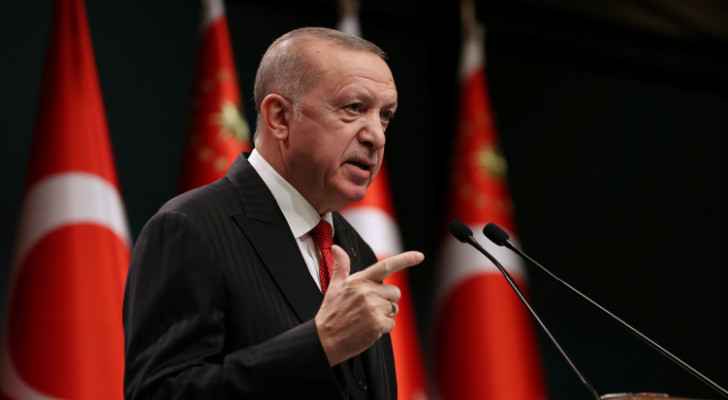 Turkish President Recep Tayyip Erdogan Monday expressed his readiness to "take the necessary measures" to quickly eliminate threats against his forces, after the recent attacks against them in northern Syria.

"We are determined to eliminate the threats from Syria," the Turkish president said upon leaving the cabinet meeting, noting that "his patience is running out."

Six people, including civilians, were killed on Monday in a car bomb explosion in the city of Afrin in northern Syria, according to the Syrian Observatory for Human Rights.

The city of Afrin and other areas under the control of the Turkish forces and the Syrian factions loyal to them in northern Syria witness from time to time car and bicycle bomb explosions, and rarely any party claims responsibility for them. Ankara often accuses Kurdish fighters it labels as "terrorists" of being behind it.

"The recent attacks and harassment targeting our police forces have reached their maximum," Erdogan said, adding, "We will take the necessary measures as soon as possible."

"Our patience is running out regarding these areas in Syria from which terrorist attacks targeting our country are launched," he added.

Thousands of opposition fighters and civilians reside in Afrin who were evacuated from several Syrian areas after the regime forces took control of it, similar to fighters from the Jaysh al-Islam faction, which was considered the most powerful in Eastern Ghouta, the former stronghold of the opposition factions near Damascus.

The region of Afrin was predominantly Kurdish and constituted the third Kurdish Autonomous Administration region before the Turkish forces, along with allied Syrian factions, took control of it in March 2018, after a massive attack it launched against the Kurdish fighters.

Since 2016, Turkey and Syrian factions loyal to it have taken control of large border areas in northern Syria after several attacks it launched against Kurdish fighters and the Islamic State.

Syria has been witnessing a bloody conflict since 2011 that has killed nearly half a million people and caused massive destruction to infrastructure and productive sectors, and led to the displacement and displacement of millions of people inside and outside the country.