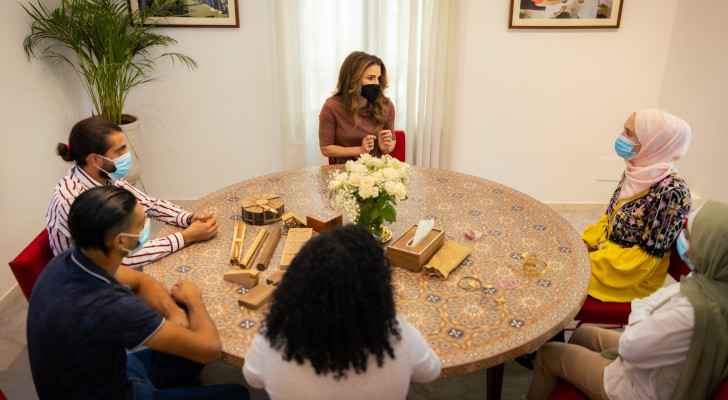 Her Majesty Queen Rania Al Abdullah visited the Turquoise Mountain showroom in Jabal Amman on Monday, where she met with a group of local artisans who have benefited from the organization’s training and employment services.

Queen Rania was welcomed to Turquoise Mountain’s showroom on Rainbow Street by Country Director Richard Dwerryhouse, who gave Her Majesty a tour of the facilities. The Queen stopped by the organization’s design studio to observe a jewelry-making workshop before proceeding to a meeting with a group of the organization’s artisans.

Turquoise Mountain launched its Jordanian operations in 2018, and currently employs around 70 people. It offers workshops, training courses, and supported apprenticeships to young Jordanians and Syrian refugees, while also operating a heritage-led restoration project at Umm Qais.

The young artisans explained to Her Majesty how they have benefited from Turquoise Mountain’s various learning opportunities, which include jewelry-making, woodworking, and design workshops. These programs also facilitate cultural exchange among Jordanian and Syrian beneficiaries, thereby enriching the local crafts market.-

Additionally, the organization hosts a cultural heritage program for children between the ages of six and 16, educating local youth on Islamic geometric design, traditional embroidery, and micro-mosaics. It also recently cooperated with the Jordan River Foundation on a re-engagement program for out-of-school children, preparing them to rejoin the formal education system.

11 defense witnesses to be heard in upcoming session in ....