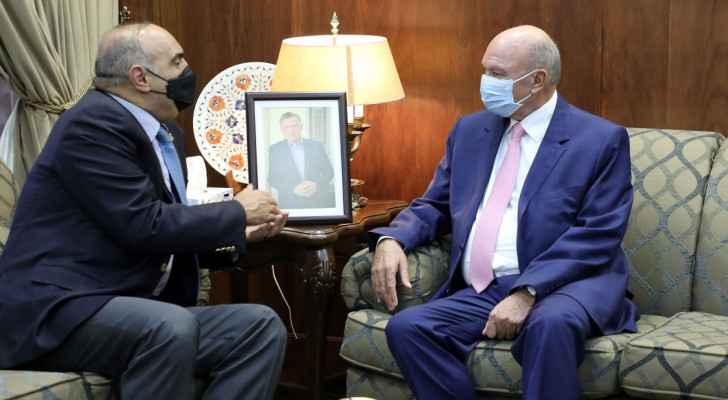 The Prime Minister, the heads of the Senate and the House of Representatives, and members of the permanent office were briefed on the main features of the ministerial reshuffle expected to be made to the government in the upcoming hours, its principles and objectives, pointing out that the expected ministerial reshuffle has an ‘economic nature,’ as the Ministry of Investment will be recreated and not only the position of Minister of State for Investment Affairs, with the aim of unifying investment references and facilitating procedures for investors.

Khasawneh stressed that the government will give the economic aspect the necessary priority and work to implement the program of priorities for its economic work, which aims to put the national economy on the path of recovery from the repercussions of the coronavirus pandemic, and the government’s commitment to submit a periodic report to His Majesty on the progress of the program.

During the meeting, Khasawneh affirmed the government's commitment to fully cooperate with the National Assembly, both dignitaries and representatives, and within the framework of the constitutional determinants of implementing the royal directives in a manner that serves national interests and meets the aspirations of citizens in various fields.

Khasawneh also emphasized the rpartnership with the National Assembly to ensure the implementation of the outputs of the Royal Committee for the Modernization of the Political System, especially the approval of the two draft laws on political parties and elections and the related constitutional amendments.

Fayez affirmed the Senate's keenness to maintain cooperation with the government to implement the royal directives and serve the country and citizens.

He pointed to the importance of overcoming obstacles in front of investors and accelerating the process of considering investment requests, calling for the need to unify investment references in one competent authority, protect investors and apply the law to everyone fairly and without exception.

Fayez also stressed that this meeting comes within the framework of informing the Senate of the expected ministerial reshuffle on the government, as it comes within the framework of partnership between the executive and legislative authorities, as specified by the constitution, calling for a focus on the economic aspect, political development and administrative reform.

During the meeting, Awdat said that today we have the right to modernize our political system in a way that would expand the base of popular participation in decision-making and lead to a well-established programmatic partisan life.

Awdat stressed that the next stage requires the highest levels of cooperation between the authorities, as the Jordanian state enters its second centenary with determination and agreement to strengthen the process of comprehensive reforms.

He added that the steps that the Kingdom is witnessing to modernize the laws regulating political life are a main point for the rest of the reforms directed by His Majesty the King.

New ministers expected to be sworn in ....

Cabinet of Ministers submit resignations to Khasawneh in ....

Cabinet of Ministers submit resignations to ....

Cabinet of Ministers submit resignations to ....