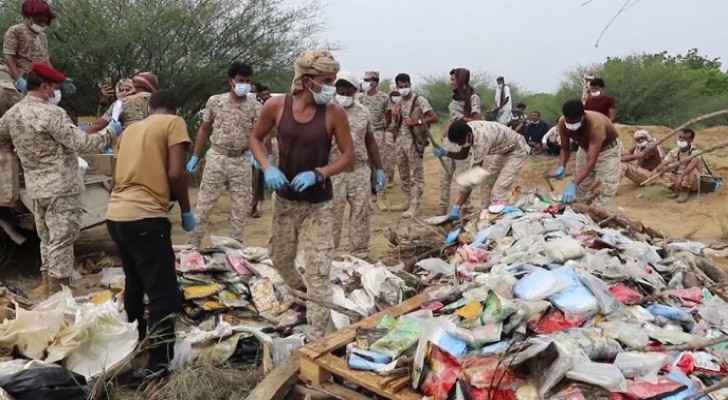 Last Tuesday, the Yemeni forces destroyed more than 1,160 kilograms of drugs and over 48,000 narcotic pills, which the security services seized in separate areas in the Hajjah border governorate with the Kingdom of Saudi Arabia.

From the beginning of 2020 until October 2021, about 15 attempts to smuggle cannabis were thwarted.

Amin Abdelwase Numan, First Lieutenant, said: “In fact, the [Houthi] militia’s terrorism was not limited to shedding Yemeni blood and planting mines, but rather turned to other forms of terrorism and a cheap and illegal profit in drug trafficking and promotion, to fund its absurd and terrorist war against Yemenis.”

He said that the police seized “an estimated quantity of one and a half tons of cannabis, and 48 thousand narcotic pills that were on their way to Saudi Arabia.”

Yemen has been suffering from a bloody conflict for seven years between the internationally recognized government and the armed Houthi group that controls Sanaa and most of the northern Yemeni governorates by force of arms, and regional and international efforts have not succeeded in putting an end to this conflict.

Lebanese PM calls on Kordahi to ....

At least 50 dead as fighting intensifies for ....

At least 50 dead as fighting intensifies for ....