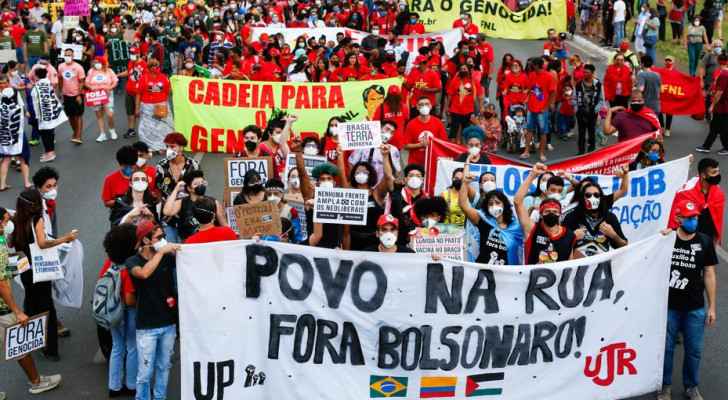 Tens of thousands of Brazilians took to the streets around the country on Saturday, once again calling for the ouster of unpopular President Jair Bolsonaro over his handling of the coronavirus pandemic, among other issues.

Large crowds gathered in Rio de Janeiro, São Paulo, Brasilia and dozens of other towns and cities as part of the "Bolsonaro Out National Campaign," which is backed by a dozen left-wing political parties and labor groups.

Among other issues, the right-wing president has come under stinging criticism for his handling of the pandemic, which has claimed nearly 600,000 lives there.

Hundreds of people marched through the central Rio de Janeiro neighborhood of Candelaria, shouting "Bolsonaro out!" which was also emblazoned on several large banners.

"We're going to get him out. The hope of the people here in the streets is to put pressure on legislators so that they call for impeachment," 69-year-old retired professor, Elizabeth Simoes, told AFP.

More than 100 requests for the impeachment of Bolsonaro have been filed with the Chamber of Deputies, but its leader Arthur Lira, a government ally, has refused to take any of them up.

The Supreme Court has ordered several investigations into Bolsonaro and his aides, including for spreading false information.

"Bolsonaro is destroying the national economy," said the center-left politician, calling for unity. "He fills Brazil with shame abroad and is responsible for the death of almost 600,000 Brazilians" from coronavirus.

Meanwhile, hundreds of demonstrators gathered along the Esplanade of Ministries in Brasilia.

Local media counted protests in 24 of Brazil's 27 states, and in 84 cities, including 14 state capitals.

Red flags of the Workers' Party of former president Luiz Inacio Lula da Silva, or Lula, could be seen Saturday, along with Brazilian flags and the signs of several other left-wing and centrist parties often seen at protests against the far-right Bolsonaro.

In recent months, protests led by leftist movements have demanded Bolsonaro's impeachment due to his mismanagement of the pandemic. But Saturday's demonstrations were also against a hike in food and fuel prices, as well as for relief for the 14.1 million unemployed people throughout the country.

"The population is going hungry, and we can't stand this government any longer," said Isadora Lessa, 22, in Rio.

"What is the importance of being here? That he knows he doesn't have unanimity, that he's going to have a hard time getting elected again," said Marcelo Werneck, who joined the protests in Rio in memory of the "friends and family" who died of COVID-19.

"If he doesn't face an impeachment, he loses the election in 2022," Werneck added.

Besieged by judicial investigations and the economic crisis, Bolsonaro's popularity has plummeted in recent months to 22 percent, its lowest level since he took office in January 2019.

But backers of the president have also made themselves known in recent weeks, as around 125,000 of them gathered in Brasilia and Sao Paulo September 7 in a show of support for Bolsonaro.

A mid-September opinion poll by the Datafolha Institute found that Bolsonaro has 26 percent support compared with Lula's 44 percent, just one year ahead of the presidential vote.

Hijjawi speaks about COVID-19 situation in ....

Hijjawi speaks about COVID-19 situation in ....