Displaced Afghans in Kabul return home to the north 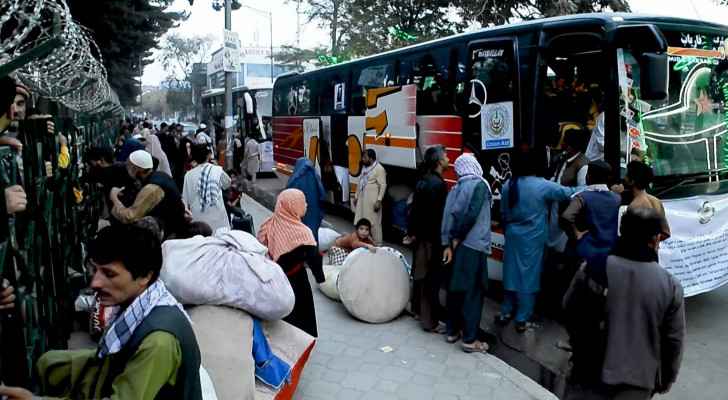 Thousands of internally displaced Afghans living at a temporary camp in Kabul have started their journey home to northern provinces, after an end in fighting that forced them to flee.

As the Taliban waged an offensive across the country earlier this year, many people fled to the safety of major cities including Kabul, before that too was seized and the US-backed government toppled.

Shahr-e-Naw park in the centre of the capital became an open-air refugee camp for thousands of families, living in dire sanitary conditions on the ground or under makeshift tents.

The Afghan Volunteer Women's Association chartered dozens of buses on Thursday to return 1,068 families to the Kunduz region.

Rafiullah Zaha from the NGO said the relocation plan included providing refugees 10,000 Afghanis ($112) in cash to buy food and distributing basic provisions such as flour, oil, rice and beans.

"We also have plans for their future," Zaha said.

The Taliban's victory over the Afghan security forces has seen an end to the clashes, bombings, and airstrikes that plagued the country for the past few decades.

"We had to move because of the war. Our house was destroyed. It was badly damaged," said Hadi, 39, who fled the town of Kunduz.

"Security has returned a little. It is better in our region," he added.

The Afghan economy is in ruins, with many losing their jobs, and a third of the population at risk of starvation according to the UN.

As of last month, the United Nations Office for the Coordination of Humanitarian Affairs had recorded more than 634,800 internally displaced Afghans this year.

An estimated 2.9 million Afghans had already fled their homes by the end of 2020, according to the UN's human rights division.

Beauty salon a women's haven in the Taliban's Kabul

Beauty salon a women's haven in the ....

US, Britain warn of threat to Kabul ....