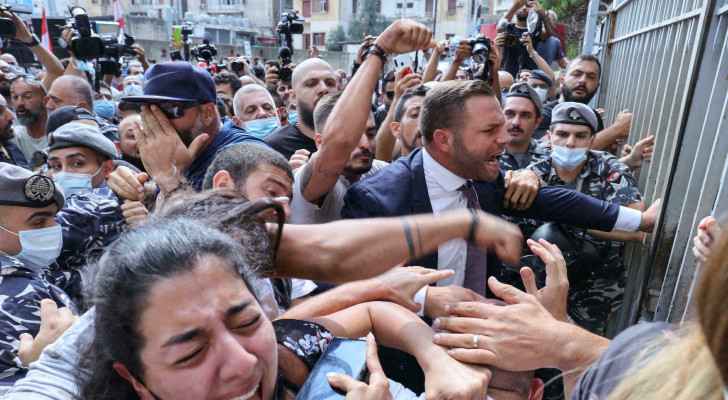 Tarek Bitar, the judge leading the probe into Lebanon's deadliest peacetime disaster, had to suspend his work on Monday after what the victims' families and human rights groups said was another blatant case of political obstruction.

The protesters gathered at the palace of justice in Beirut under close surveillance from a heavy police deployment and unfurled a large banner that read: "You won't kill us twice."

Carrying portraits of their lost relatives and placards calling for justice, the protesters voiced their support for Bitar, whose summonses targeting senior officials have earned him a series of thinly veiled threats.

Bitar's predecessor Fadi Sawan was also removed from the investigation earlier this year after issuing summonses to former ministers and top brass over the explosion.

"We have been suffering for 13 months from the interference of politicians and sectarian leaders in the investigation," said Rima al-Zahid, whose brother was a port employee and died in the blast.

"When I heard that the investigation was halted, I felt that we were being betrayed again, and that they were killing us a second time," she said, breaking down in tears as she spoke.

The August 4, 2020 explosion of hundreds of tons of ammonium nitrate fertilizer at a port warehouse caused one of the largest non-nuclear explosions in history.

The shockwave was felt as far away as Cyprus, entire swathes of Beirut were devastated, 215 people were killed and thousands wounbeided, some of them several kilometers from the blast site.