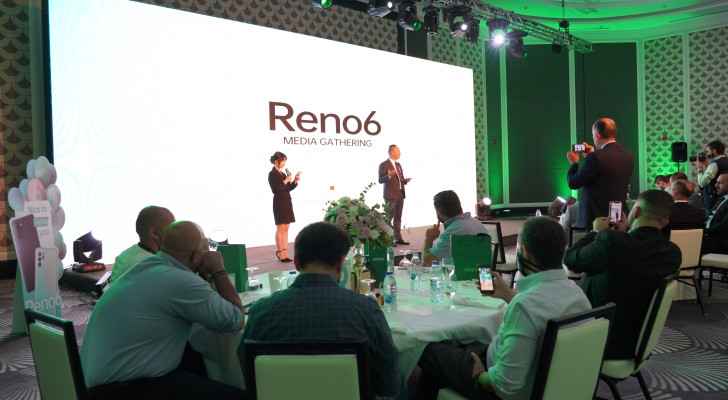 Tuesday, the world's leading smart device brand, held a press conference to introduce Jordanian media to the new Reno6 5G series, which will be available in Jordan by the end of the month.

During the conference, which was held at the St. Regis Hotel, the company showed journalists and technical reviewers the Reno6 5G series, which included three phones: the Reno 6 5G, Reno6 Pro 5G, and Reno6 Z 5G. These phones are notable for their high-end designs and cutting-edge AI capabilities, which offer a superior portrait video experience with "AI Portrait Videos."

Eugene YU, OPPO’s country manager, emphasized that the Reno6 series of phones, all of which support the 5G generation, represent the company's vision to introduce the latest and best high-level security, speed, and innovation technologies to the Jordanian market, as OPPO strives to offer its customers the most that they want and need in an innovative way. To that end, this series expresses the company's brand philosophy, which is supported by the most recent innovations and distinguished services at competitive prices and accessible to all.

He added, “With the release of this phone series, we are ushering in a new era in the world of professional photography and video recording using smart devices. Thanks to the advanced technologies in these devices supported by artificial intelligence, we give our customers and users of these phones free rein to highlight their capabilities and experience photography and video recording in a professional way wherever they are.”
Specifications

Additionally, it supports shooting in HD quality with a resolution of 720 pixels at 30 and 60 fps. TheReno6 5G also includes a dedicated color temperature sensor that captures colors closer to reality.

The Reno6 5G is the first phone in the market to include MediaTek’s latest 5G-integrated SoC, the Dimensity 900, based on a 6nm process.

The Reno6 Pro comes with the latest technology, a 50MP Al Quad camera matrix on the back of the device and a 32MP Selfie Camera. What makes this series of OPPO phones unique is the Sony IMX766 sensor jointly developed by OPPO and Sony, in addition to the Qualcomm® Snapdragon™ 870 mobile processor and platform. The sensor features DOL-HDR technology, All-Pixel Omni Focus. Additionally, it has a dedicated color temperature sensor that captures colors more accurately.

On the front of the Reno6 Pro 5G, there is a 6.55” AMOLED screen while the display resolution is 2400x1080 pixels with a 90Hz refresh rate and 180Hz touch sample rate which delivers a more vivid and smooth viewing experience.
The Reno6 Pro phone comes with a “nano” dual SIM feature with an internal memory of 256 GB
and a random capacity of 12GB.

Reno6 Z 5G
The Reno6 Z 5G is the ideal device for fashion professionals and those interested in the field worldwide. It is characterized by its great picture-taking performance, where users can capture better videos and portraits with artificial intelligence during night and day. Apart from its other advanced features, including its ability to support unprecedented 5G connectivity, and OPPO’s newly named diamond Reno Glow design with ultra-slim retro design and a unique glass feature designed by OPPO.

The Reno6 Z 5G phone operated with a Dimensity of 800U octa-core processor, is connected to 8GB RAM, expandable up to 13GB, and 128GB internal storage, it also has a front camera located in a small hole at the top left of the screen capable of capturing 32MP selfies, 108MP video recording at 30fps.

About OPPO
OPPO is a leading global smart device brand. Since launching its first smartphone - “Smiley Face” - in 2008, OPPO has been in relentless pursuit of the synergy of aesthetic satisfaction and innovative technology. Today, OPPO provides customers with a wide range of smart devices spearheaded by the Find and R series, ColorOS operating system, as well as internet services such as OPPO Cloud and OPPO+. OPPO operates in more than 40 countries and regions, with 6 research institutes and 5 R&D centers worldwide and an international design center in London, OPPO’s more than 40,000 employees are dedicated to creating a better life for customers around the world.

OPPO continues efforts to support and promote 5G in ....

OPPO continues efforts to support and ....

OPPO unveils 6G white paper looking ahead to future of ....