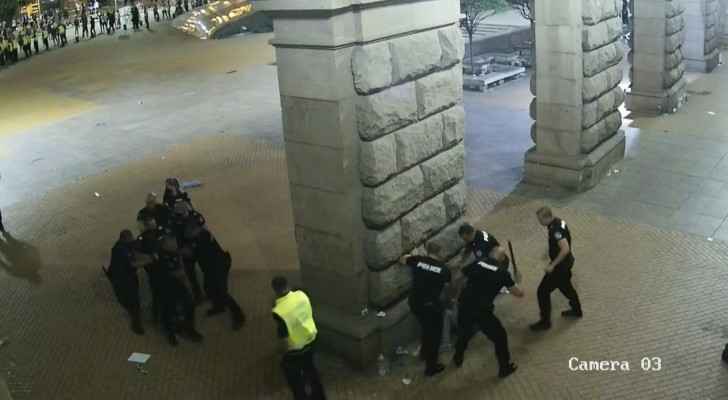 Bulgarian student Evgeni Marchev was taking part in his first demonstration in Sofia when police detained and beat him until he lost consciousness.

The incident in July 2020 passed largely unnoticed until last month when CCTV footage of it was shown in parliament and then published in the media.

Despite a long history of police violence going unpunished in the EU country, the images have caused deep shock.

Marchev's case -- like others before it -- may well have remained overlooked.

Since 2000, the Strasbourg-based European Court of Human Rights (ECHR) has condemned Bulgaria in 46 cases related to the use of force by police or inadequate
investigation of alleged abuses.

Only Romania, whose population is three times bigger than Bulgaria's 6.9 million people, did worse, with 64 condemnations.

However in response to police violence during mass anti-graft protests just over a year ago, Bulgaria's parliament has set up a committee to look into it.

Thousands rallied mainly in Sofia against three-time prime minister Boyko Borisov who has been in office for almost a decade.

He has since been unable to clinch another term after two elections this year returned a fragmented parliament with no one party able to form a coalition government.

A snap poll has been set for November to try to resolve the political crisis.

On July 10, 2020, Marchev attended one of the big anti-Borisov demonstrations with friends in front of the prime minister's office.

When suddenly bottles were hurled at police, they responded by grabbing the 23-year-old and other protesters from the crowd to drag them into the shadows of the government building, where they handcuffed and beat them with fists and kicks, the CCTV showed.

"A policeman kept saying: 'You will die.' I was terrified," Marchev, who remotely studies European law at a Dutch university, told AFP.

He blacked out and was hospitalised with concussion.

The beating still haunts him today, he said, adding that he didn't do anything to provoke the police.

The video shown in the committee and released to the media "sincerely shocked" the country, Hadjigenov said.

Sofia prosecutors responded saying a probe had been opened in late 2020 into three out of 15 initial complaints of police violence during the protests.

The chief prosecutor Ivan Geshev also denounced the "unacceptable violence", although he had previously defended police actions during the protests that also targeted him personally.

Lawyer Mihail Ekimdjiev, who has represented many Bulgarian victims of police violence at the ECHR, said impunity stemmed from the country's communist past.

The prosecution has long shown "solidarity (with the police) in line with the old totalitarian reflex", he told AFP.

The signal, he said, was to discourage protests, adding it was clear that "anyone who finds himself in the wrong place at the wrong time can be mistreated by those who are supposed to protect us."

Past cases have seen police cleared or freed due to the statute of limitations expiring.
They included a Roma man who died in detention in 1998, another Roma who choked during an arrest and a man killed when police fired grenades at his house while trying to arrest him.

The ECHR condemned Bulgaria in all three cases.

"What clearly distinguishes Bulgaria (from other countries with police violence) is the impunity," said Krasimir Kanev, chairman of the Bulgarian Helsinki Committee human rights group.

The parliamentary committee this week published a list of proposals to reform law and order and end police impunity, including introducing checks and controls.

But it will now fall to MPs elected later in the year to take up the proposed changes.

Marchev says he doesn't hold out much hope from any prosecution probe but is relieved a public discussion is now under way.

Before the video sparked an outcry, he had spoken out about the beating and said he'd felt "alone".

Other victims did not, often "for fear" of jeopardising their work and future, he said.

"I had started to ask myself if I had not been exaggerating," he said, having faced accusations in the media and on social networks of "slandering police and staining Bulgaria's image".

But, he insisted, he did not regret his actions. "The battle will be long, the road to true democracy is strewn with many difficulties."