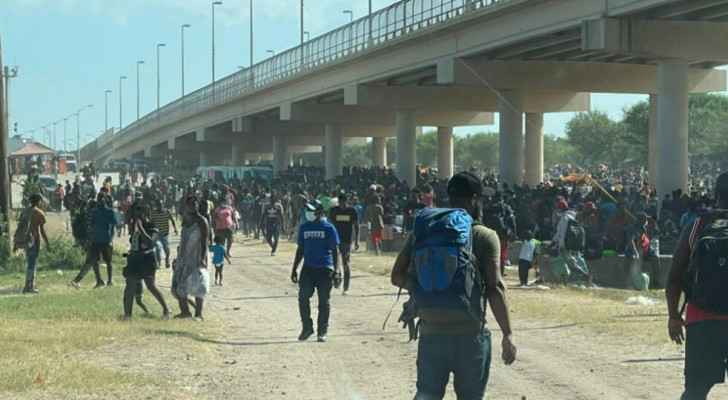 The mayor of Del Rio, Texas declared a state of emergency Friday after more than 10,000 undocumented migrants, many of them Haitians, poured into the border city in a fresh test of President Joe Biden's immigration policy.

Del Rio Mayor Bruno Lozano said that the migrants were crowded in an area controlled by the US Customs and Border Patrol (CBP) beneath the Del Rio International Bridge, which carries traffic across the Rio Grande river into Mexico.

Thousands were seen under and around the flyover, adults and families.

Many were Haitians hoping to stay in the United States as their country suffers after a large earthquake and continuing political turmoil, Lozano said.

Hundreds continued to flow into Del Rio Friday, boosting up the number that Lozano put at 10,503 under the bridge late Thursday.

All were awaiting processing, and hopefully a chance to remain in the United States, by the CBP, which has been overwhelmed by migrants crossing the border from Mexico as well as tens of thousands of refugees from Afghanistan.

"The border patrol right now is so overwhelmed with the influx of migrants in the Del Rio sector," Lozano said.

The White House remained silent on the issue as political pressure mounted on Biden to address the influx.

Both Republicans and Democrats called for quick action from Biden, whose administration recorded and mostly expelled more than 200,000 migrants at the border in both July and August, the highest numbers in more than a decade.

Some said Biden's decision in late July -- after Haitian president Jovenel Moise's assassination -- to allow Haitians without US visas at the time to remain in the country offered an incentive for others to come.

"10,503 illegal aliens are under this bridge tonight because Joe Biden made a political decision to cancel deportation flights to Haiti," Texas Republican Senator Ted Cruz tweeted on Thursday.

"This needs an urgent response from the Biden administration that is comprehensive and includes a cross-agency collaboration," she said in a statement.

"Let's help these folks who are stranded there and act swiftly before this gut-wrenching situation grows to an unmanageable level."

The number of Haitians crossing the southwest border into the United States has been surging for months.

Many come from South America, where they may have migrated to years ago, especially after the country's January 2010 earthquake.

More are on the way. In Chiapas in southern Mexico earlier this week, Domingue Paul, a 40-year-old Haitian, told AFP he had traveled from Chile where he lived for five years, and was hoping to join a sister living in the United States.

Lozano's emergency declaration said the city expected thousands more migrants in the coming weeks and they were taking a toll on city resources and heightened the COVID-19 danger.

It allows the city to request federal financial aid, and it also calls on the state to deploy law enforcement officials to help with the situation.

In a statement, the CBP said it was sending extra personnel and resources.

"To prevent injuries from heat-related illness, the shaded area underneath Del Rio
International Bridge is serving as a temporary staging site while migrants wait to be taken into Border Patrol custody," it said.

CBP said the "vast majority" of single migrants and many of the families would be expelled under the government's Title 42 policy curtailing immigration due to the coronavirus pandemic.

"Those who cannot be expelled under Title 42 and do not have a legal basis to remain will be placed in expedited removal proceedings," CBP said.

Biden promised a more humane approach compared to his predecessor Donald Trump, but he has fought to stem a surge of migrants crossing the border since he took office in January.

Most are sent back, but many families and almost all unaccompanied minors are permitted to stay.

On Thursday a Washington judge introduced a new challenge, ruling against using the Title 42 law to push migrants back over the border.

The judge said his ruling would take effect in two weeks.

On Friday afternoon the Justice Department appealed the ruling.